A tiny orphan kitten found a sweet cat family to love. It turned his life around. 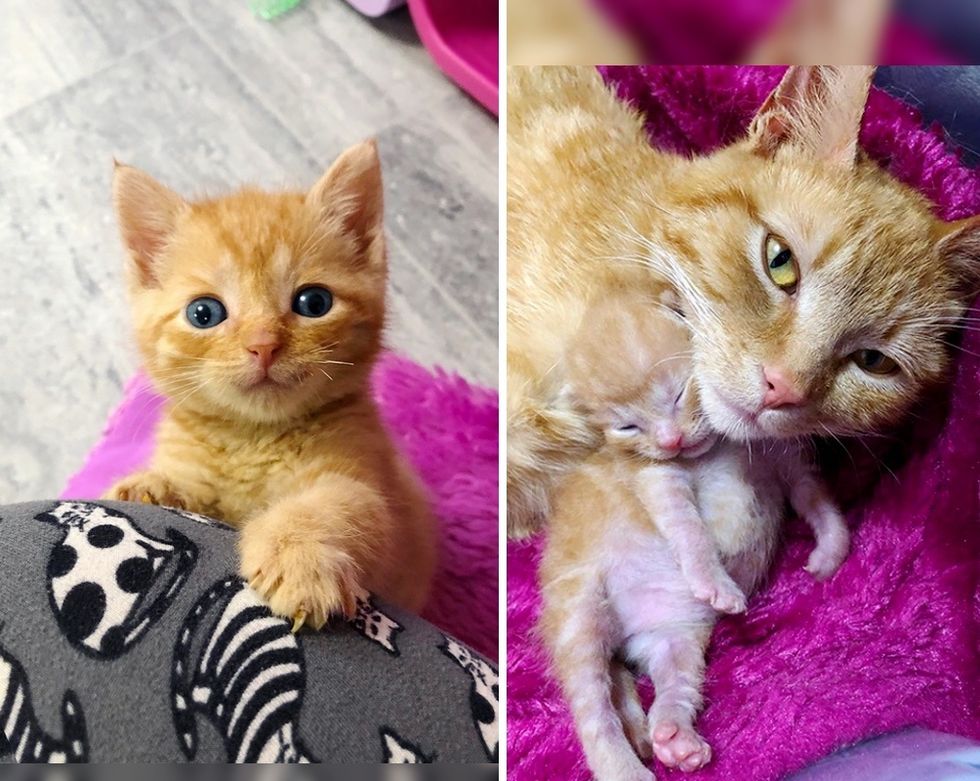 A ginger kitten was spotted on the side of the road, all alone. He was in poor shape and his paws were covered in tar. The Good Samaritans that found him, rushed to get him help.

Mellissa, founder of Tiny but Mighty Kitten Rescue (in Cornwall, Ontario, Canada), was contacted about the little orphan in need. “When I got the call about the kitten and found out he was also an orange tabby, I knew I had to take him,” she shared.

Just a few weeks prior to finding this roadside kitten, Mellissa took in a pregnant stray who had been roaming the streets almost all her life. A few days later, the ginger cat, Ginny, went into labor and gave birth to a litter of ginger babies. 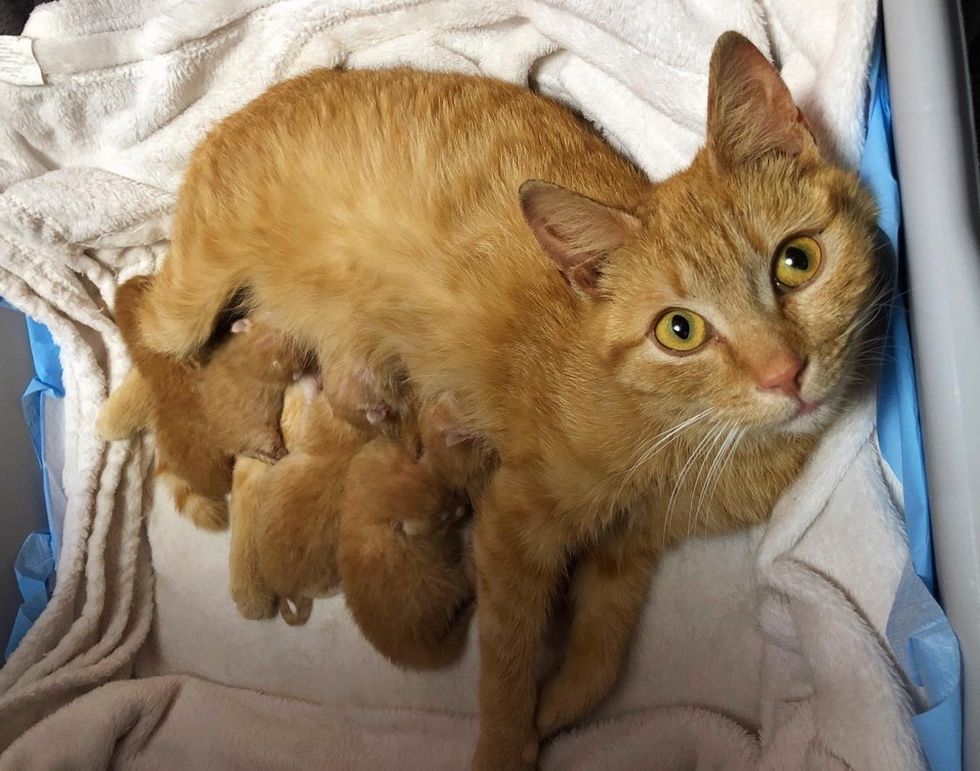 Despite mama’s unconditional love and Mellissa’s very best efforts, two of the six kittens (Poppy and Phoenix) lost their fight. The remaining four (Felix, Fox, Finn and Peach) pulled through and blossomed.

Ginny was very protective of her kittens and refused to leave their side. She chirped and talked to them constantly, as if to tell them to be careful. Mellissa had to place food inside the nest to make sure that mama would not skip a meal. 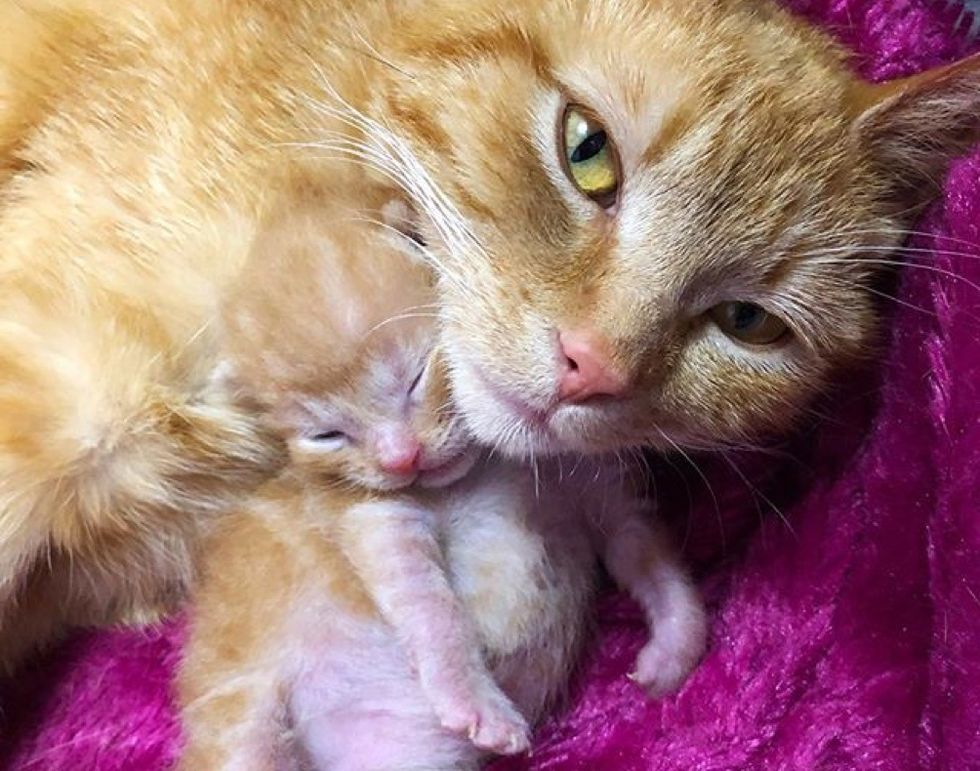 When Mellissa heard another ginger baby needed help, she had one goal in mind — that was to save him. “I wasn’t planning on taking in anymore babies after losing Phoenix and Poppy, but I felt like it was meant to be. Maybe one of them had returned in my care to try again,” Mellissa shared with Love Meow.

She set up a cozy bed with soft blankets, a heating pad to keep the little guy warm, and a sleep sheep with a constant heartbeat to help comfort him. With round-the-clock tube-feedings and supplemental care, the kitten began to perk up. 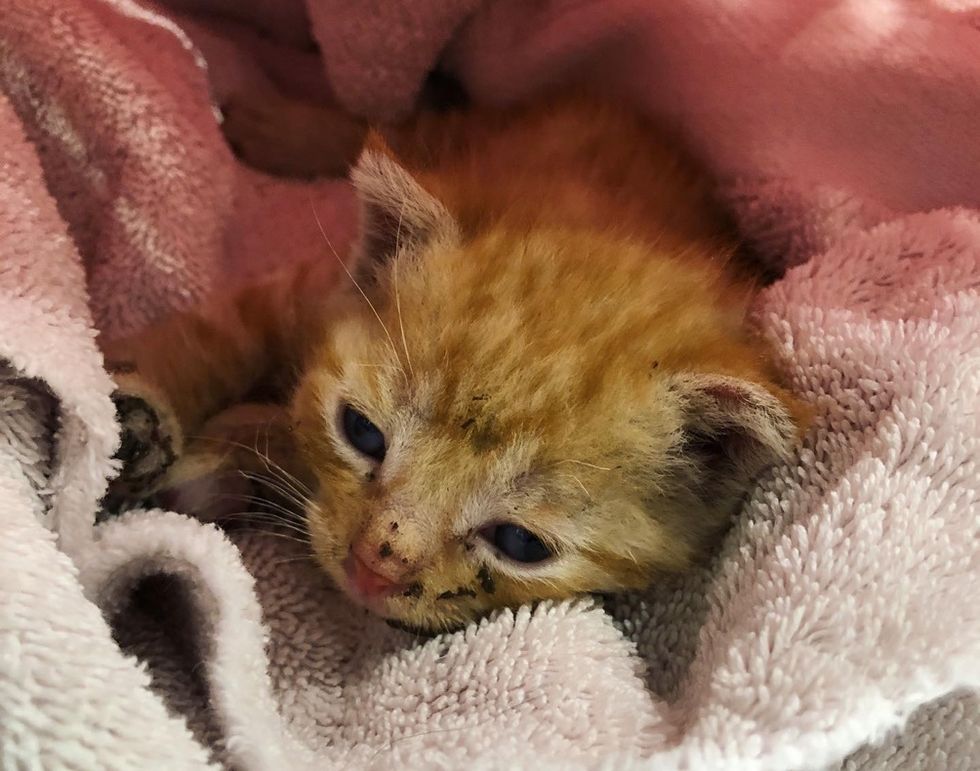 She applied mineral oil to his paws to help break up the tar and later used Dawn soap to try to remove it. After many sleepless nights, painstaking care, and a few trips to the vet, the little guy’s paws healed up nicely.

The sweet boy was named Fenix in honor of baby Phoenix. He purred nonstop and was so happy to be cared for. 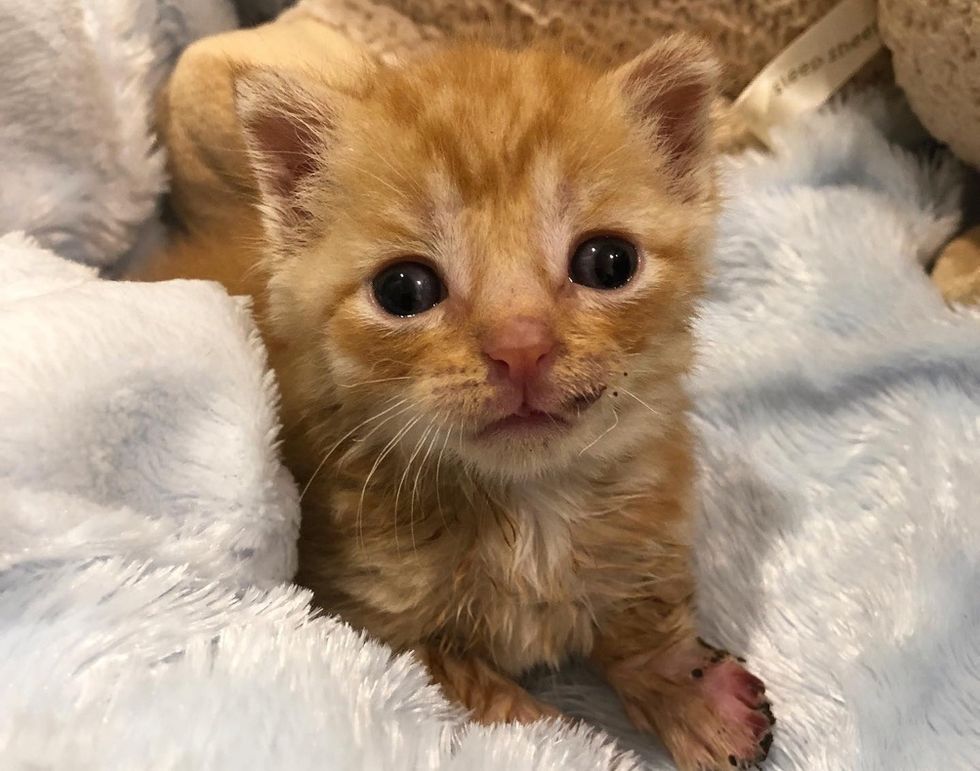 “He started making muffins (kneading blankets). He also had this habit of putting his paws on my face – almost as if he was showing me how thankful he was and how much better his paws felt,” Mellissa added.

When he was ready to socialize with other kittens, Mellissa brought him to meet the ginger family. 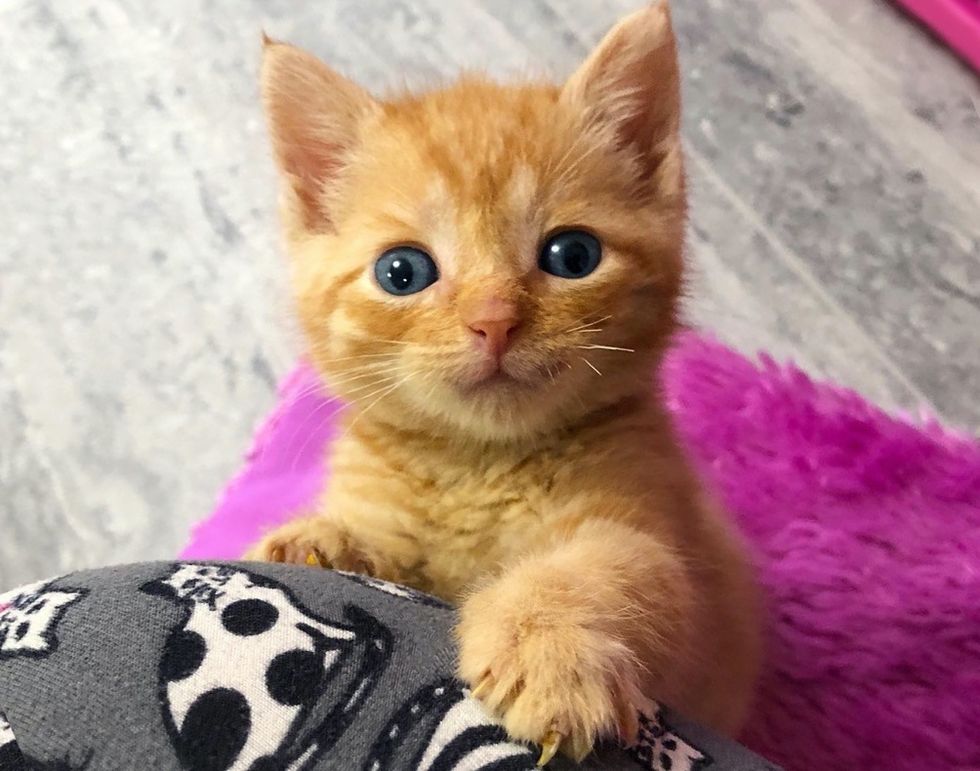 As soon as Mama Ginny heard his squeaks, she came running. She showered him with kisses, grooming and loving on him as her own.

“The rest of the babies accepted him instantly. It was just meant to be!” 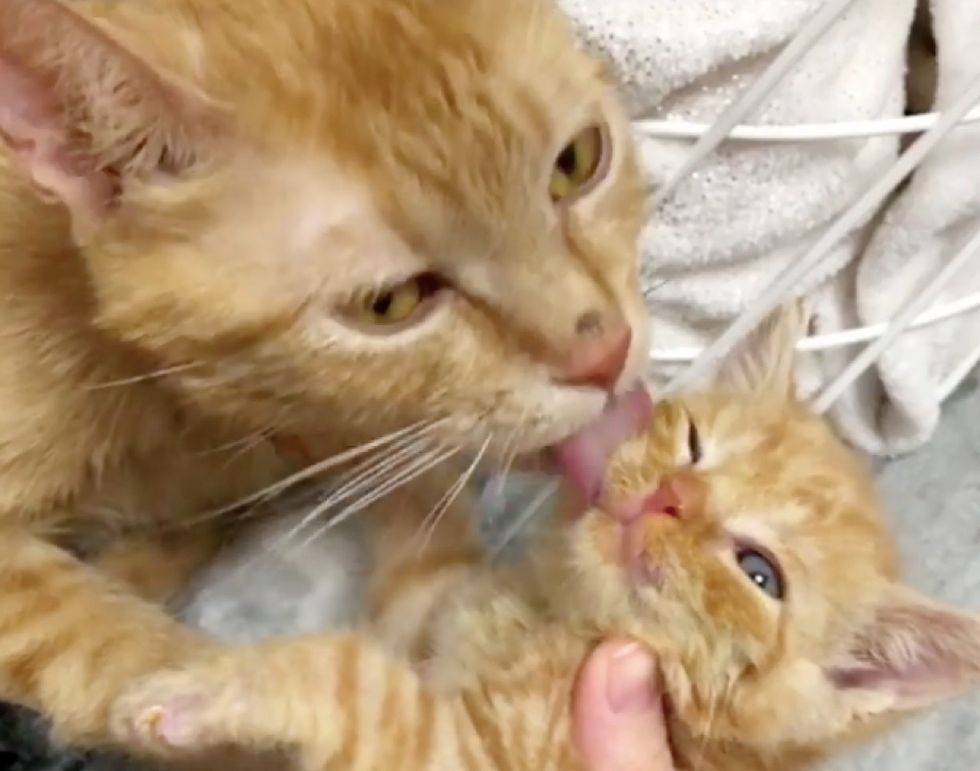 Little Fenix fit into the family like he had always been part of it.

He was a bottle baby and never nursed on the mama, but whenever his siblings gathered around for a snack, Fenix wrapped his arm around Mama Ginny, cuddling away. 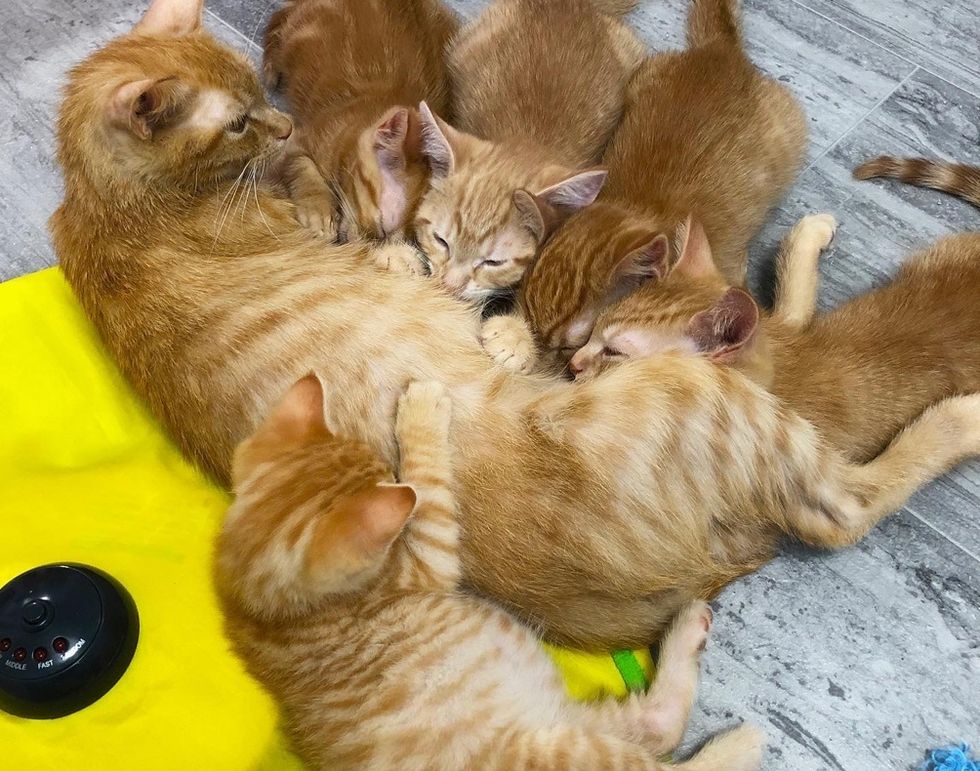 Despite being two weeks younger and smaller in size, Fenix tried his utmost to keep up with the bigger kittens.

He learned to play hard and nap even harder. 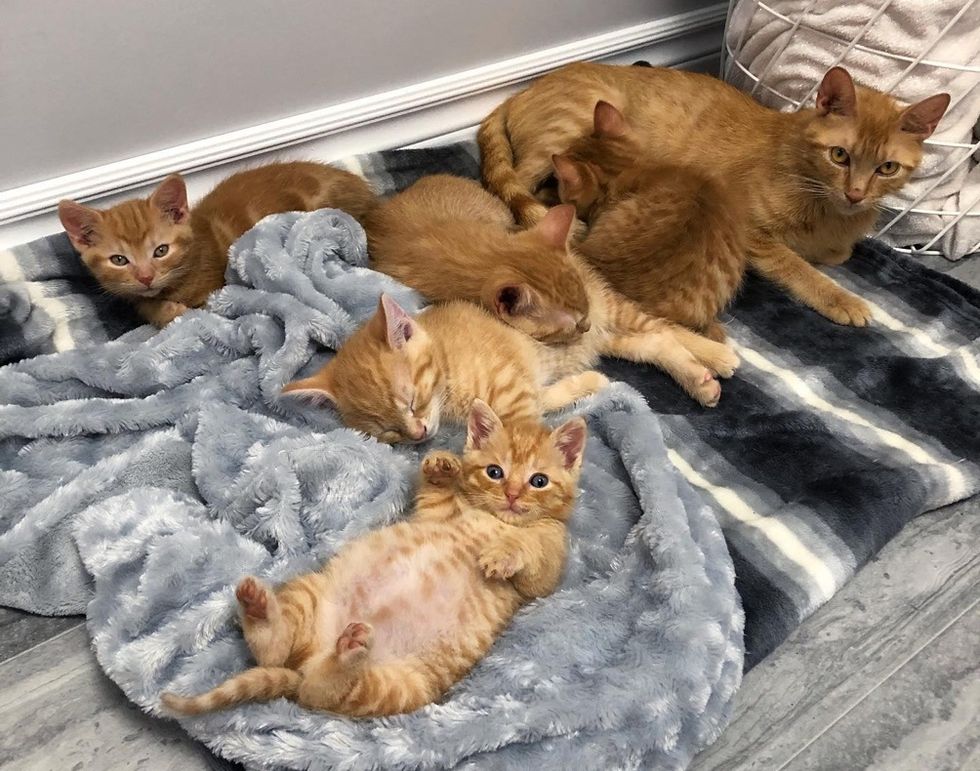 Big brother Felix, the love-bug of the litter, took Fenix under his wing. He kept him company and was always there for him when he needed a cuddle. 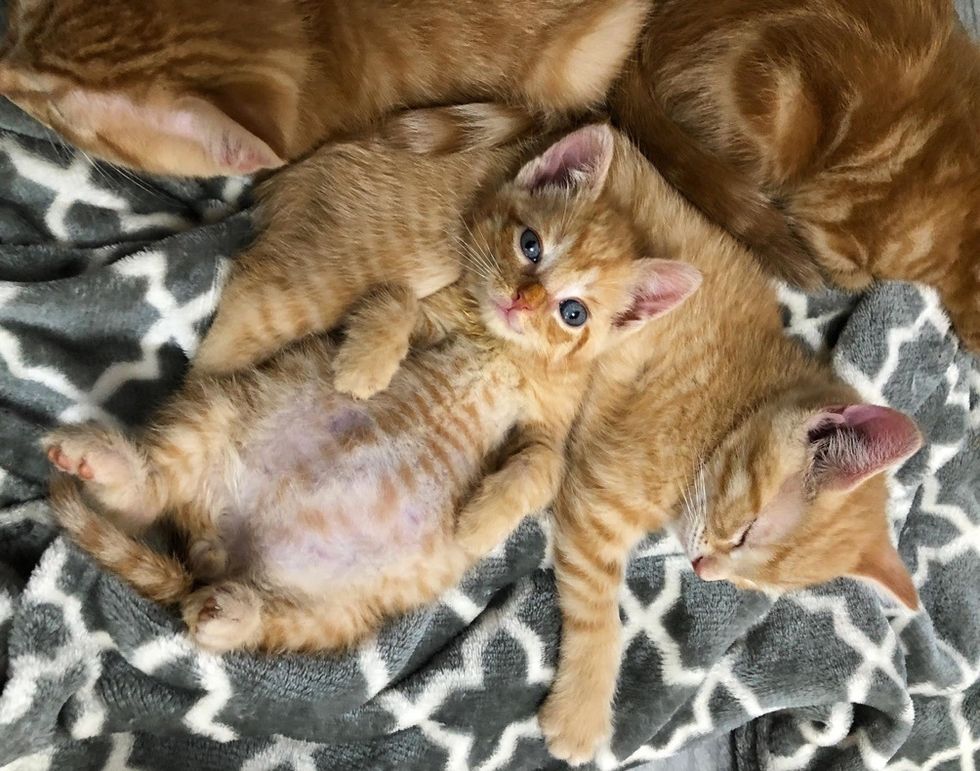 When it came time to find the little family their forever homes, Mellissa wanted to place them where they would always have a feline companion. 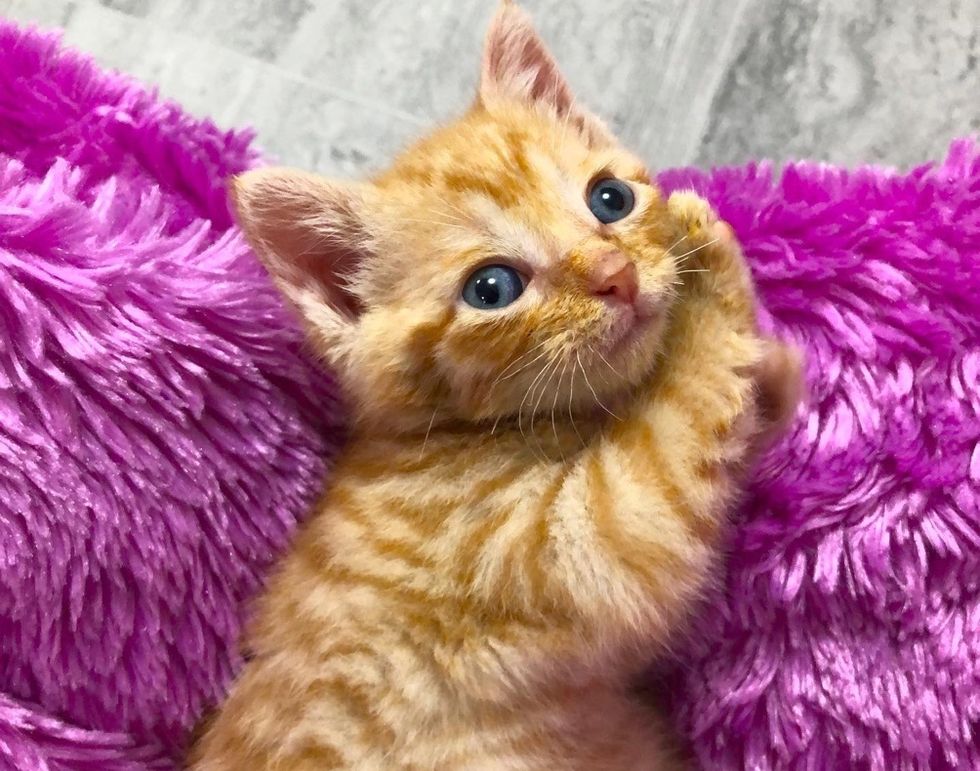 Mama Ginny has come a long way since she was found on the streets. She raised her own kittens and rescued another baby. She learned to trust, relax around people and even play with toys for the first time. “She has grown so much, on so many different levels.”

Ginny was adopted into a loving family along with her beloved daughter Peach. 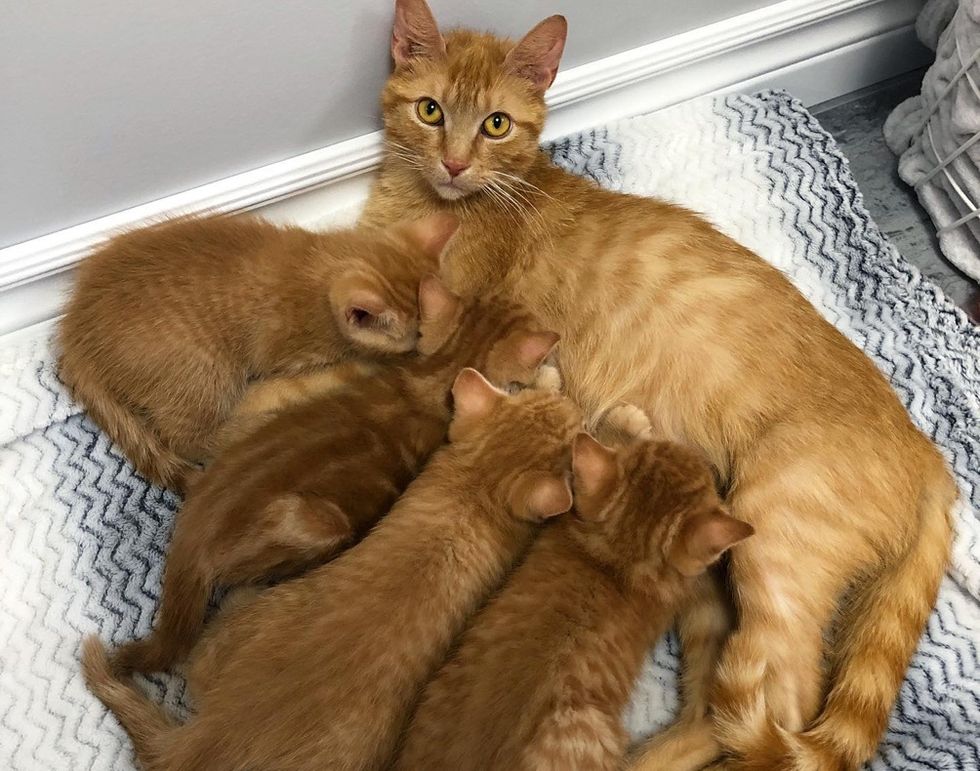 Fox, Felix and Finn all have gone to lovely homes where they have a feline best friend to play and cuddle with.

Just like his siblings, Fenix has found his perfect match with a feline sister to spend his VIP life with. 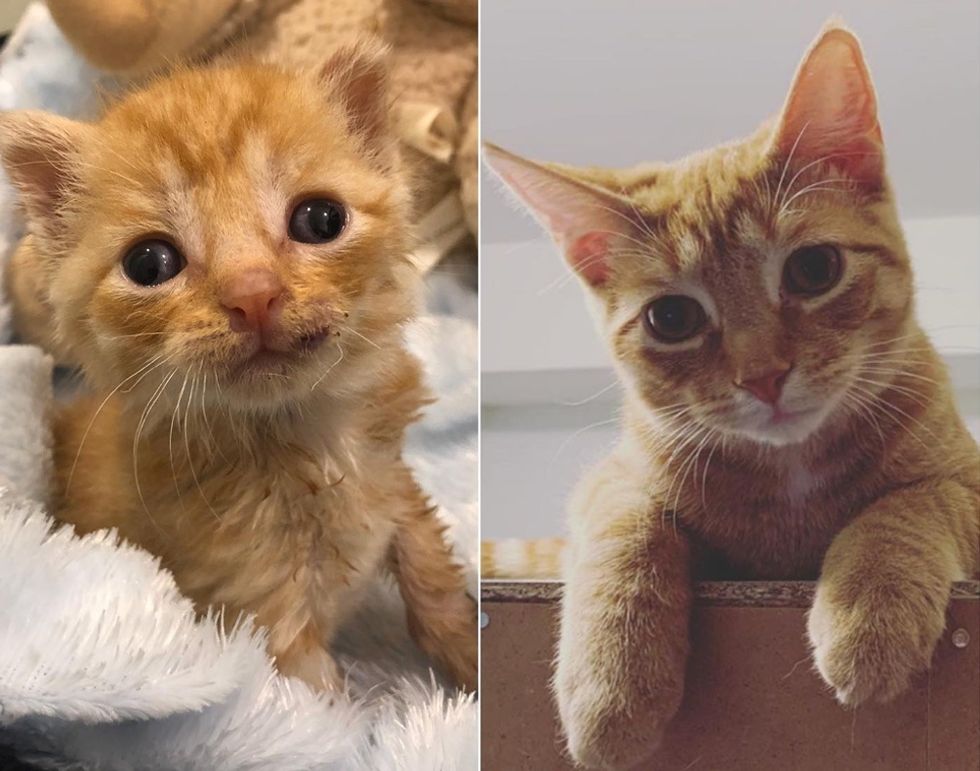 Fenix, then and nowTiny but Mighty Kitten Rescue

Related story: Stray Cat Wanders into Family’s Home to Have Kittens and It Changes Her Life Forever