A shy cat hid in a closet behind snuggle toys until he met a kitten who needed a friend. 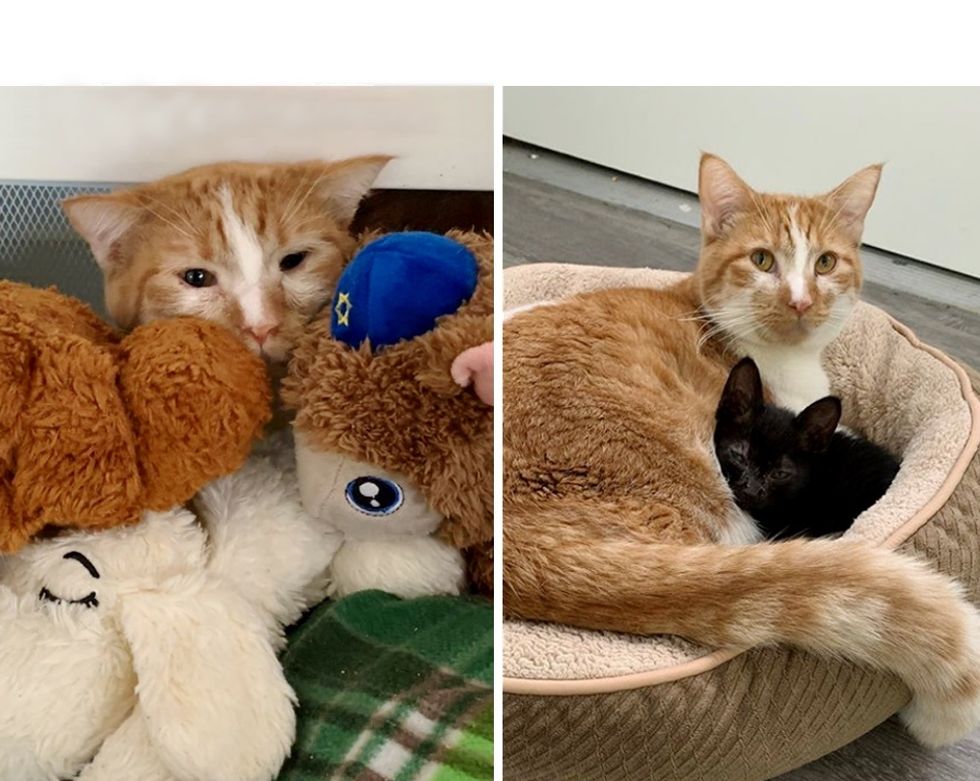 George, a 1-year-old cat, came to Alley Cat Rescue in Los Angeles for a chance at a better life. He was very shy at first and spent the first couple of days hiding behind a few plush toys.

The orange and white cat was brought to a city shelter, battling an upper respiratory infection and needing rescue. Alley Cat Rescue took him into their care, so the sweet feline could start his healing process in the comfort of a loving foster home.

“George used to hide in the closet with the snuggle toys as he was unsure of the new place he was in after the shelter,” Alley Cat Rescue told Love Meow. 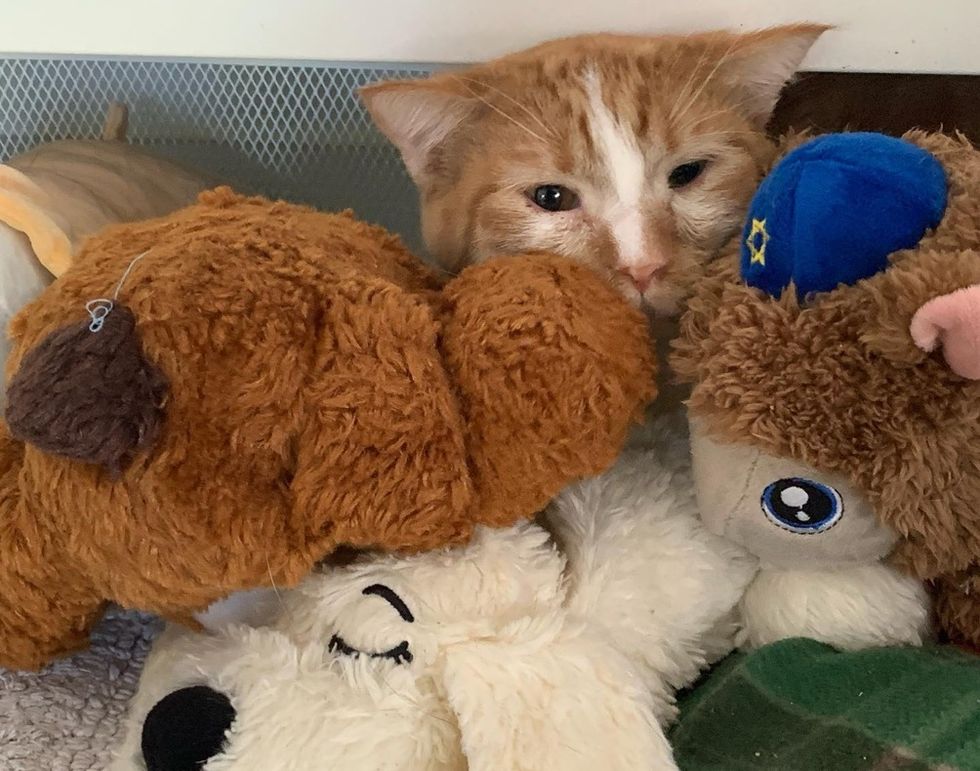 After days of getting the right meds and eating well, the sweet cat bounced back on his paws and started to come out of his shell. He was still a bit shy but mustered enough courage to venture out from hiding. George started to spend more time on the windowsill, watching the day go by.

Around that time, a kitten named Sprout was brought to the rescue from another shelter. The kitten came down with an awful cold. While he was fighting the illness, he would hide in his little “cave” (cat bed) and try to be invisible. 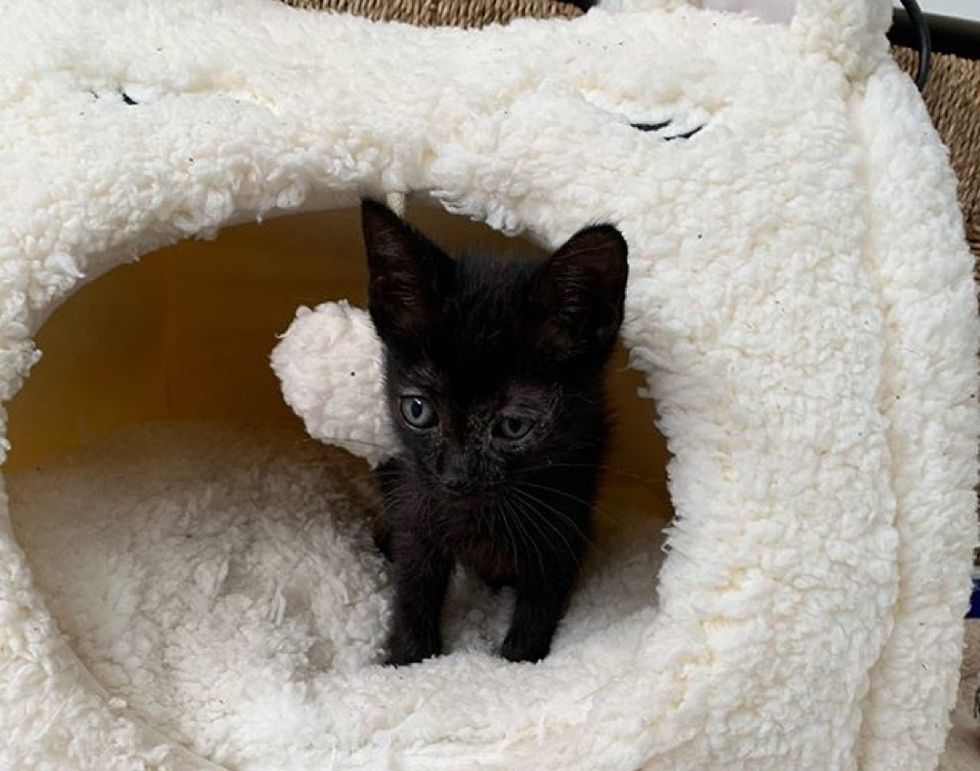 Caretakers at the rescue worked tirelessly around the clock to nurse the kitten back to health. They fed him with a syringe every four hours and provided fluids and supplements whenever he needed them. His eyes began to clear up, and the kitten regained his appetite and strength.

Once Sprout was strong enough, he came out of his little cave and immediately looked for someone to cuddle. The rescue knew just the perfect friend to introduce him to. 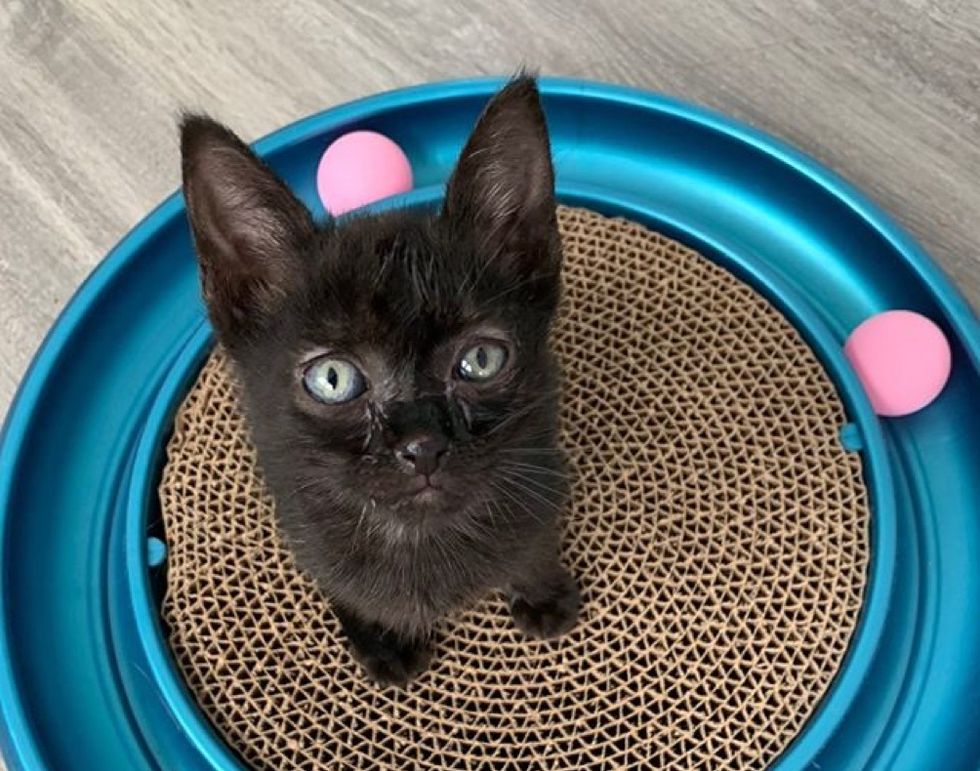 They brought Sprout to meet George. The confident little kitten walked right up to the cat who was much larger in size. After a few sniffs, the two just hit it off. Before they knew it, the kitten curled up next to George, and George showered him with licks.

“They both found each other and now are cuddling all the time,” Alley Cat Rescue shared with Love Meow. 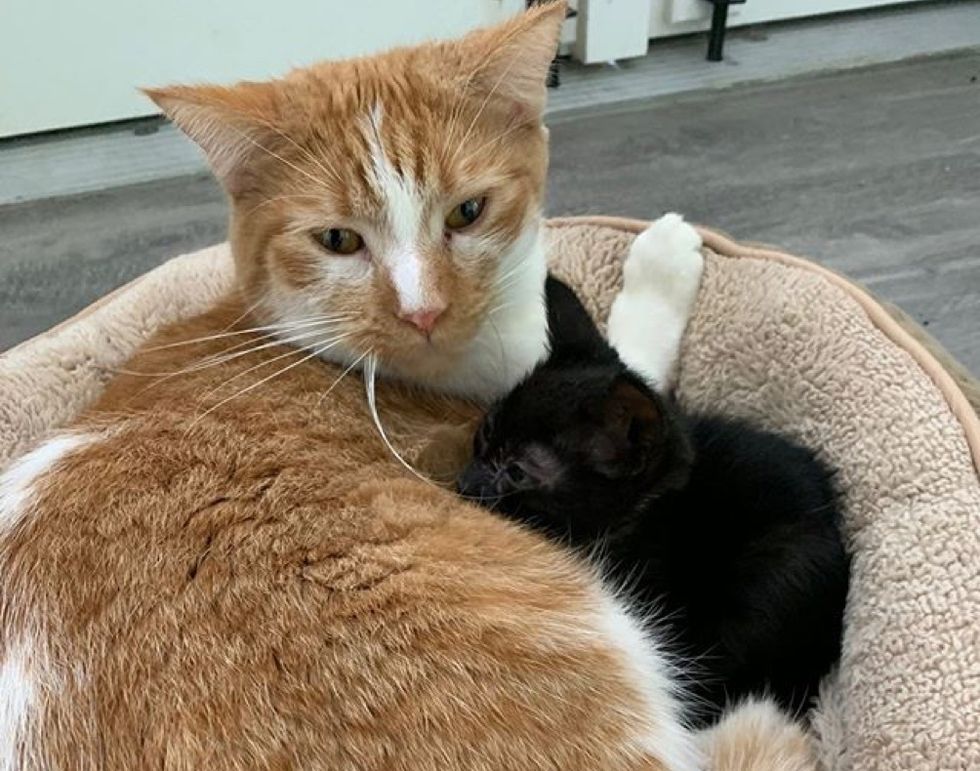 George feels more at ease with the kitten around, and keeps rumbling with his adorable purrs. Sprout’s confidence really rubs off on him. He is no longer afraid of being in a new place as long as his buddy is with him.

“George was sweet and loved cuddling, but just a little unsure in his new space. Now, Sprout has made him more confident with us.” 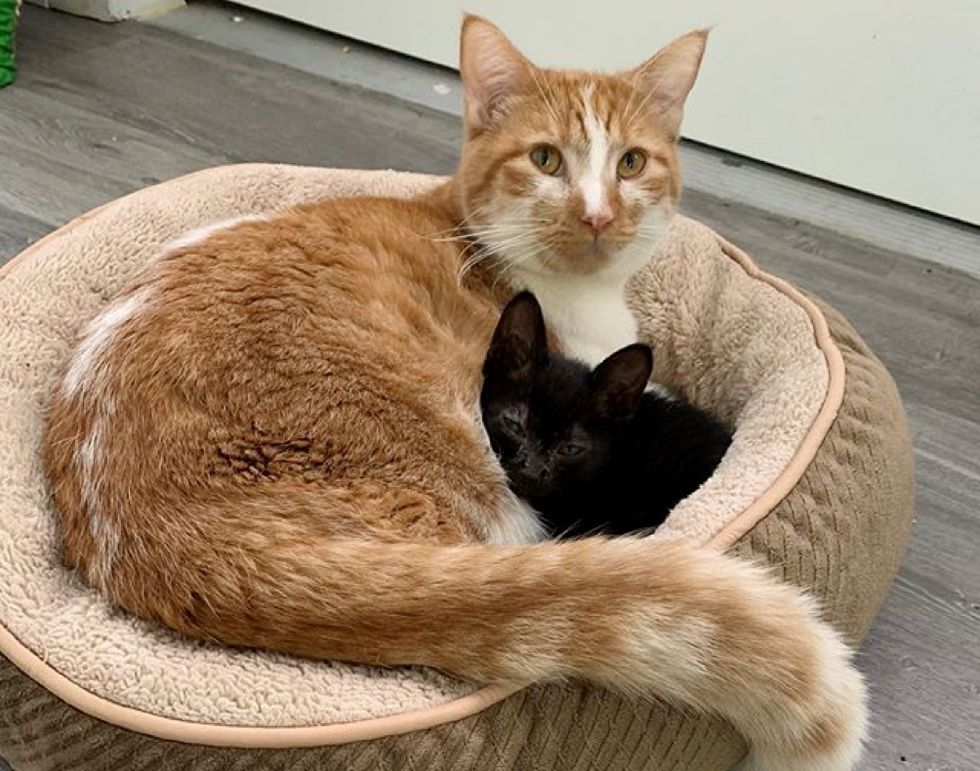 The kitten adores George just the same and is so happy to have a cuddle buddy to keep him company.

Watch Sprout and George in this cute video: 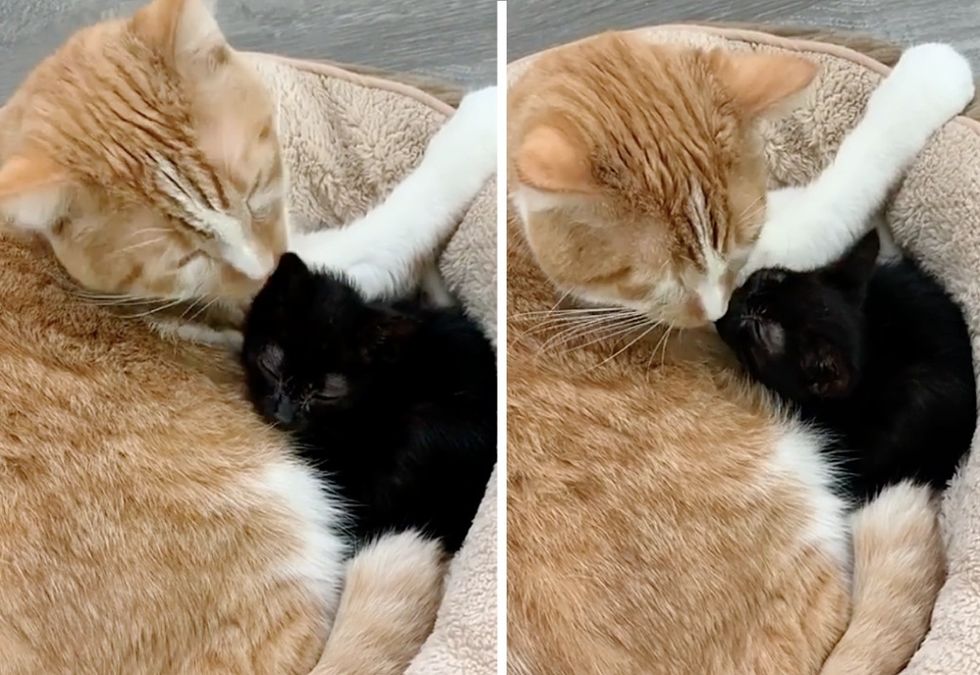 “George and Sprout have been hanging out together as they are both recovering from colds. George is better, and has taken over as a caretaker of the feline babies.

“Sprout is doing so well. It’s hard to believe that just a week ago, we were struggling to get his weight to increase.” 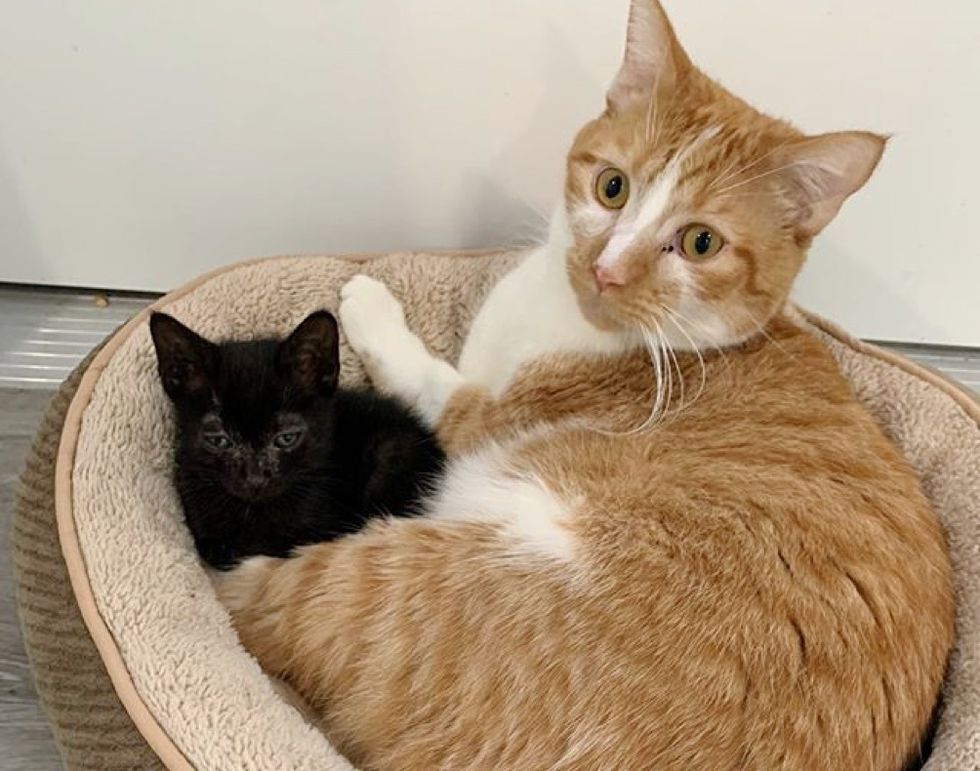 Related story: Cat Befriends Stray Kitten from Yard and Brings Him into His Home