Two kittens from the same litter have been each other’s biggest support since day one. 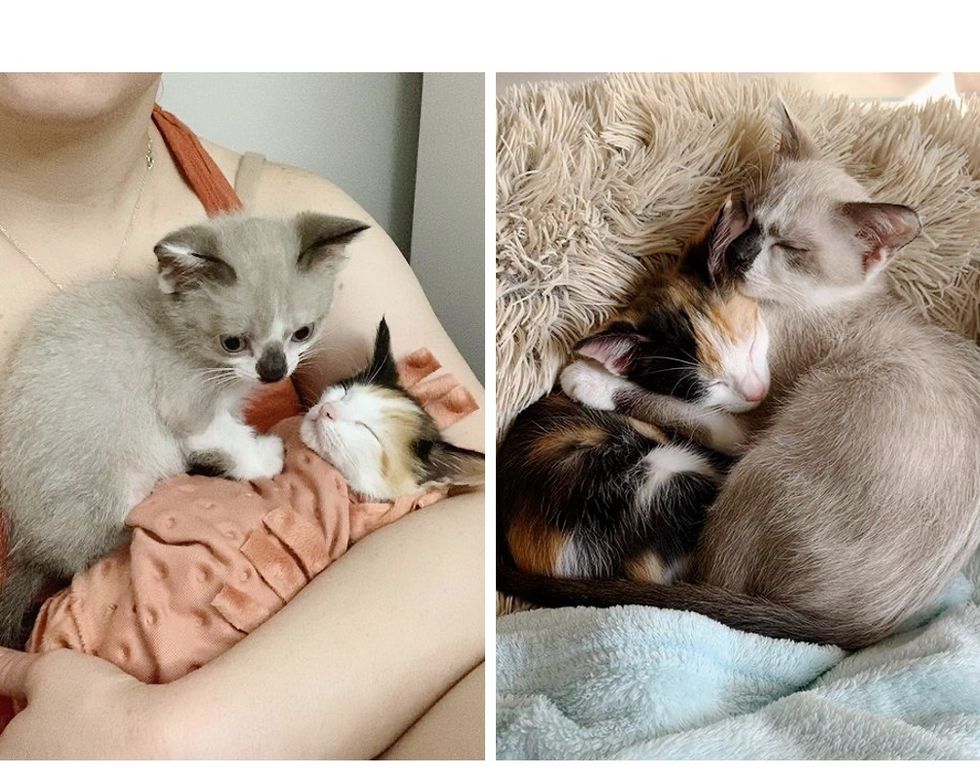 Four rescued kittens were brought to the kitten college program at Animal Welfare League of Arlington when they were less than three weeks old. Lauren, a foster volunteer, took them into her care and started around the clock bottle feedings.

After getting all cleaned up and their bellies filled, the kittens snuggled up in a purr pile in their warm bed and went right to sleep. “They were so content and always purring,” Lauren shared. 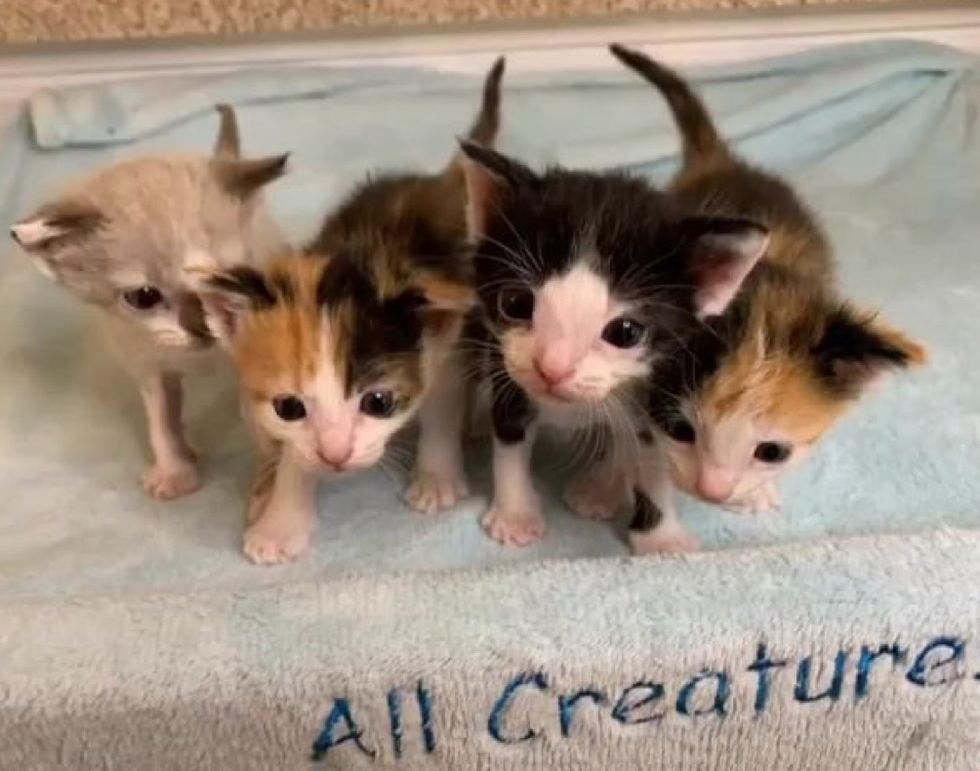 Kylie and Kip were the tiniest of the bunch. The little calico sister was very needy, constantly demanding attention from everyone around her.

“When she was hungry, she would scramble her way up your chest, put her face right next to yours, and let out a very long and drawn out, high-pitch squeal,” Lauren added. 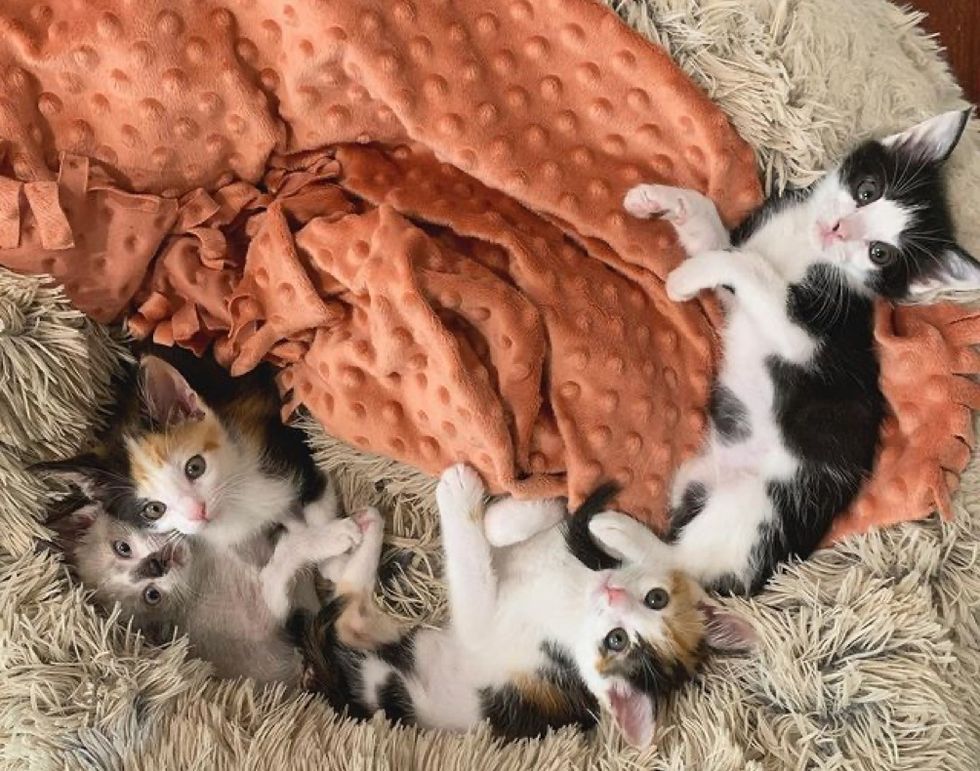 At six weeks old, Kylie still insisted on finishing her meal with a bottle. Kip, on the other paw, was an observant little brother who kept an eye on his siblings and tried to mimic what they did.

He was the smallest litter mate and had a few health issues to overcome. When he noticed that Kylie was snuggling with other kittens or Foster Mom, he came right over and joined the cuddle-fest. 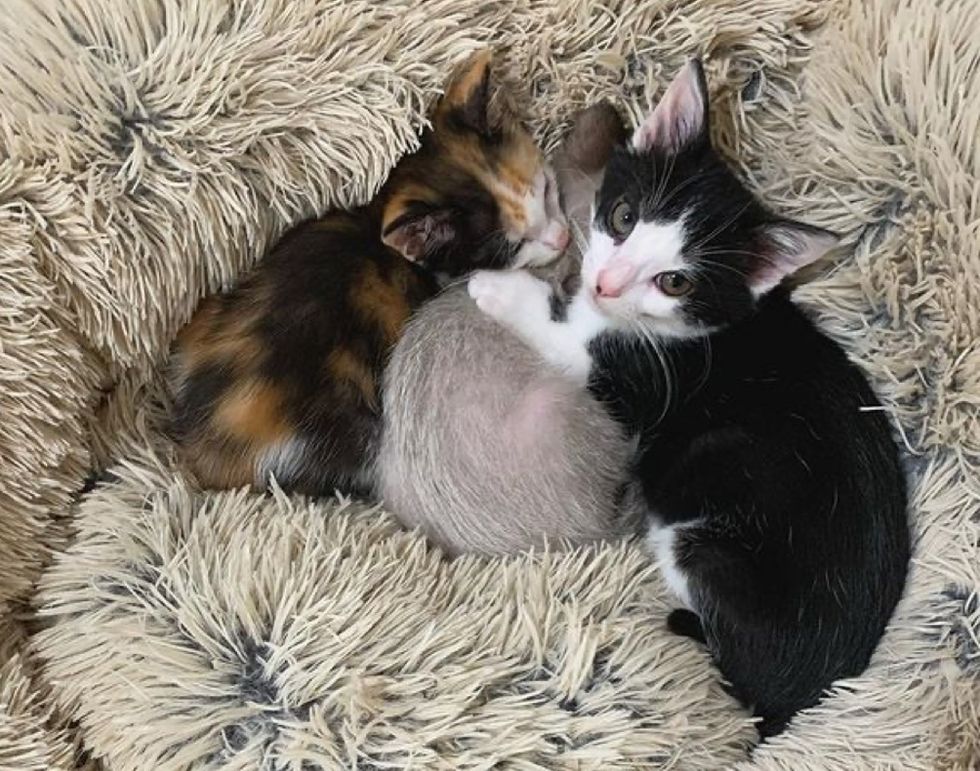 “The other day, I wrapped Kylie up in a burrito, which is a technique that can be very soothing for anxious or frightened kittens. Kylie immediately relaxed and fell peacefully asleep. All she wanted to do was sit in my lap or be held in my arms,” Lauren said.

“Like the good little brother he is, Kip climbed up my legs and across my chest and then proceeded to sit right on top of the Kylie burrito.” 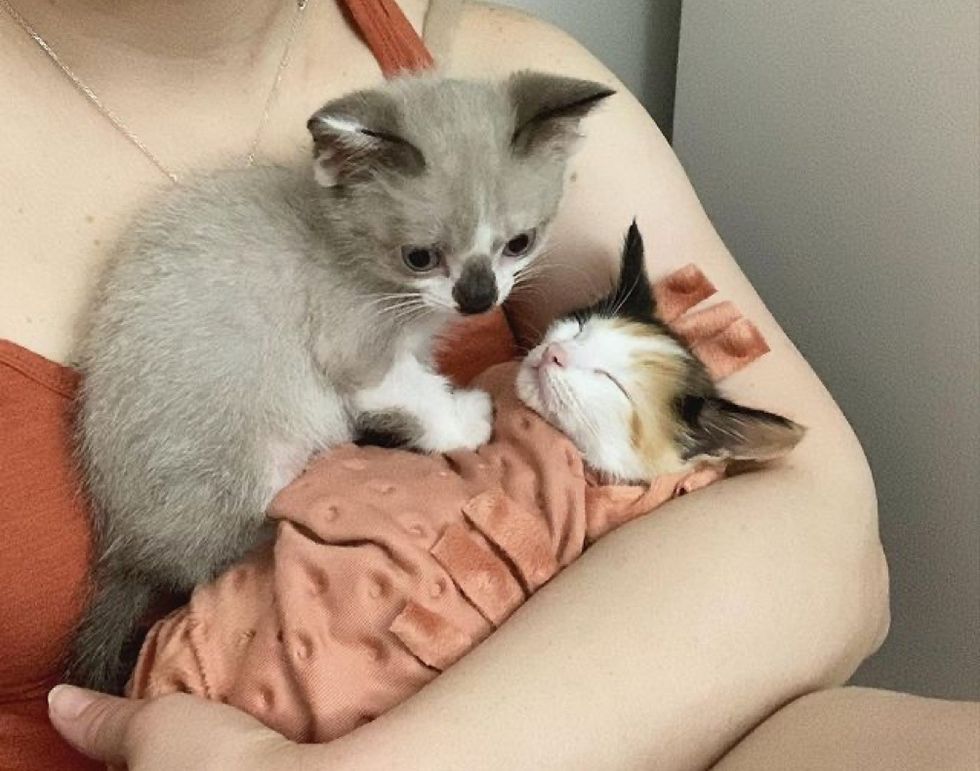 From that day on, Kip spent more time keeping Kylie company and often lay on top of her as if to try to comfort her.

“Kip and Kylie have become such good buds. They are both on the small side and have sweet and gentle personalties that go together so well,” Lauren shared. 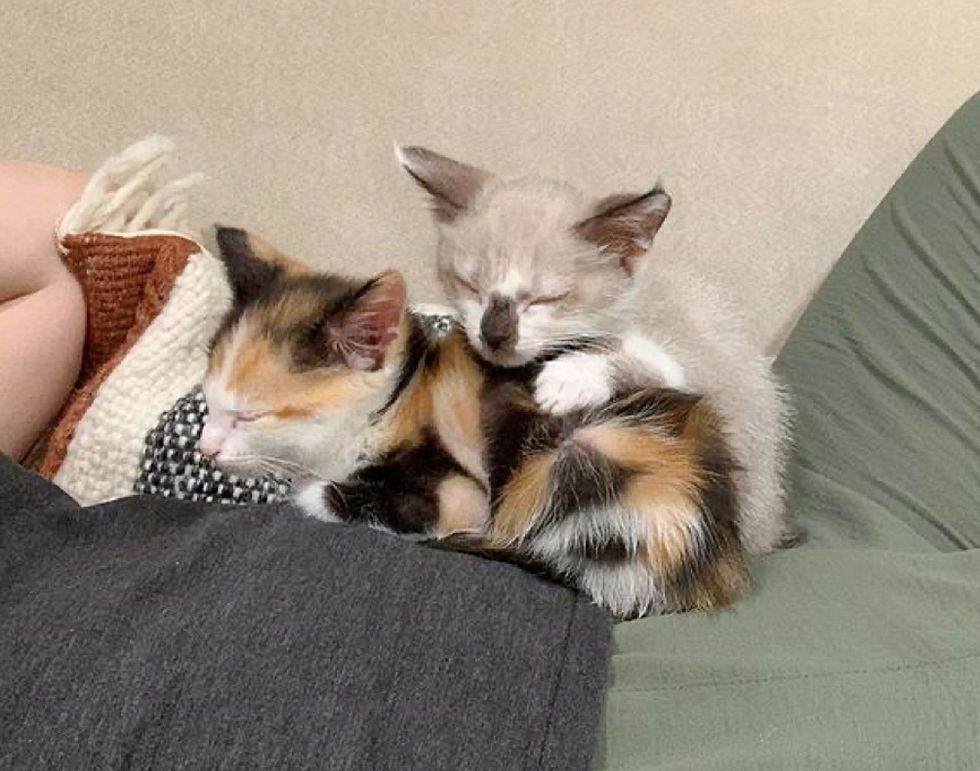 Combined with the right meds, supplemental bottles between meals, and electrolytes, the kittens were nursed back to health. They started putting on weight again and gaining a lot of energy.

The bonded pair continued to cheer each other on throughout their recovery. 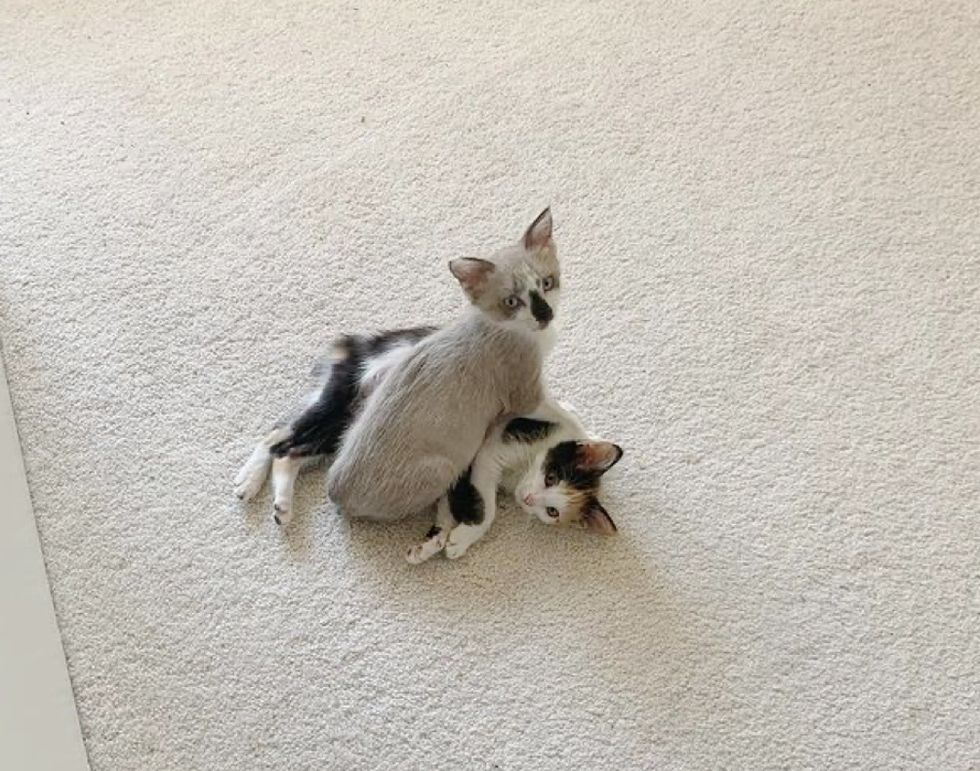 With a lot of support and encouragement from Kylie, Kip finally filled out and blossomed into a striking young cat.

When they were big enough to spread their wings and fly, Lauren knew that this adorable duo needed a family that would love them both forever. 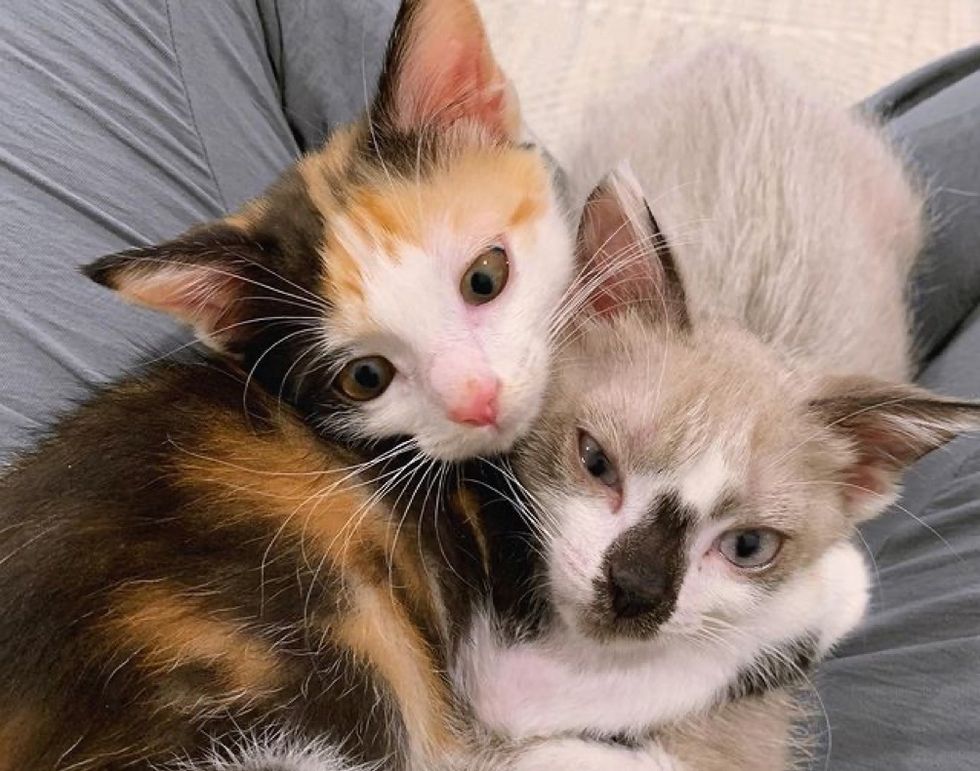 “We’ve been through a lot and they have two of the most magnetic and enchanting personalities I have ever seen in kittens,” Lauren said.

“It took them a bit longer to get to two pounds, and there were several health detours along the way, but they are finally ready for the next chapter in their lives.” 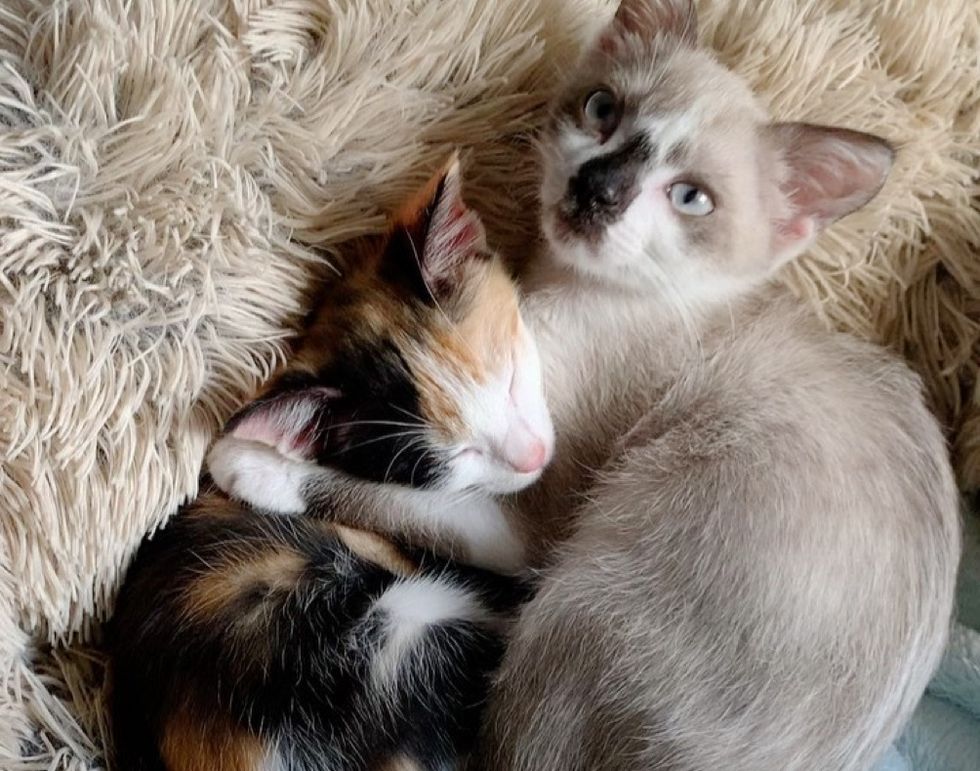 “Kip was a bit smaller than his siblings and he took time hitting those development milestones. I will always remember his boundless trust, hilarious bursts of friskiness, and the way he looks at the world with literal wide-eyed wonder,” Lauren said.

“Kylie used to be a scrunched up, small, and anxious girl who would never let me out of her sight, but she’s blossomed into a beautiful little lady with a quiet and growing confidence. I will never forget our mornings together, when she would climb up to sit on my shoulder and repeatedly nudge her tiny sweet head against mine.” 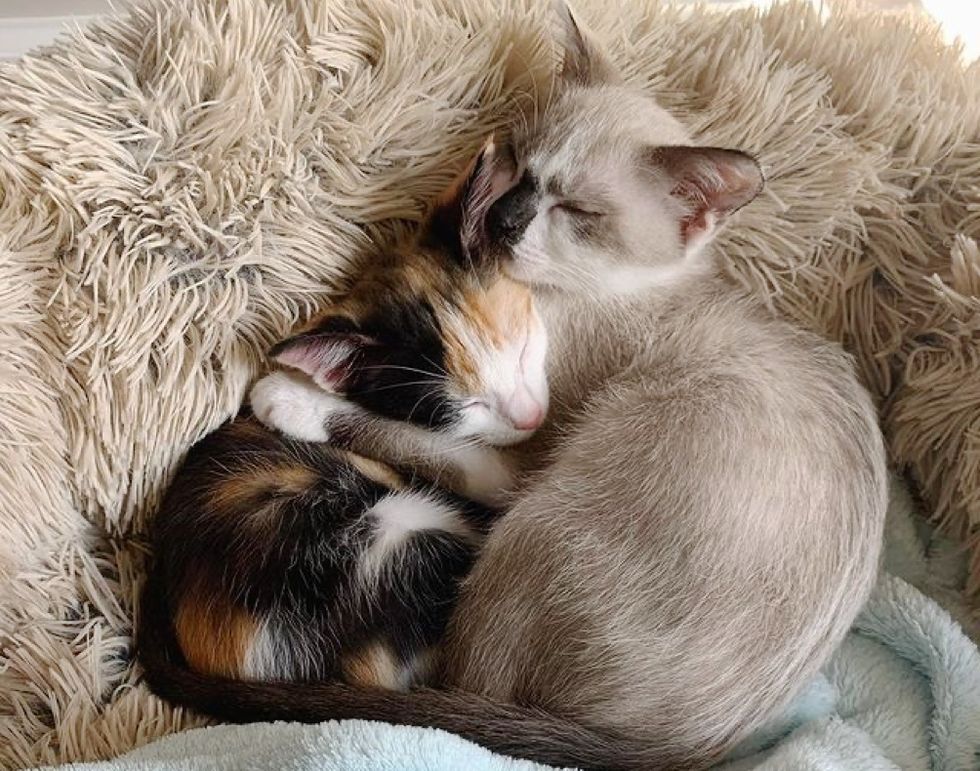 Today, Kip and Kylie (now renamed Ren and River) had their dream come true when they graduated from their foster home and embarked on a new journey to their forever home, together. 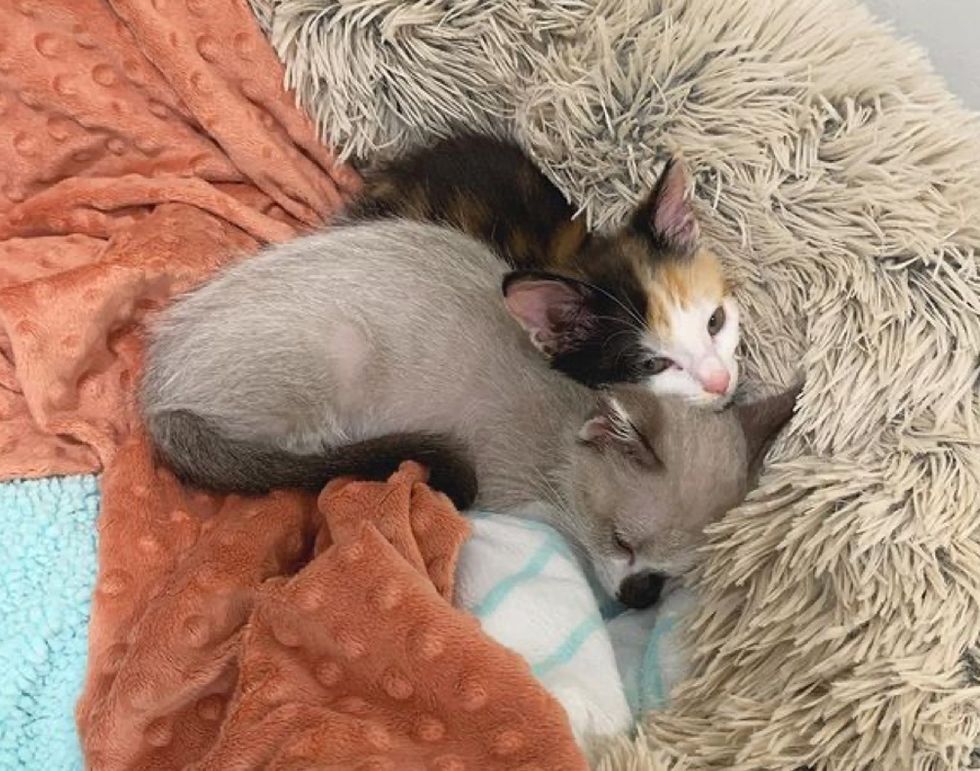 “I couldn’t be more proud of my still tiny but oh so very mighty babies,” Lauren wrote. 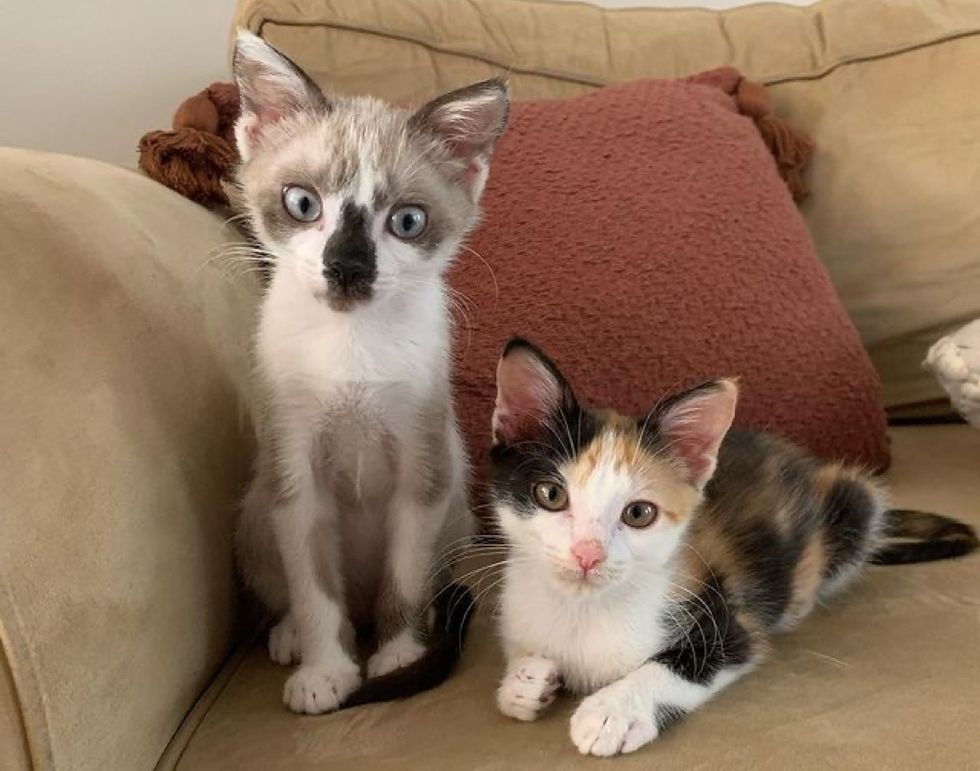 Kitten Found Alone in Yard, Kneads Her Way into Hearts of Family

A sweet calico kitten kneaded her way into the hearts of a family after being found by herself in a backyard. Sarah Kelly @kellyfosterkittens A little kitten was discovered outside a resident’s home in North Carolina. The man who spotted her, looked around for other…

I think it’s fun when industry neighbors play nice together and this latest collaboration with PNW companies, Korkers and STLHD, is one part badass wading boot and one part branding fun.   The limited edition Korkers X STLHD Terror Ridge wading boots come with both studded…