Peggy is a little wonder kitten who has three paws and a canine friend to help her thrive. 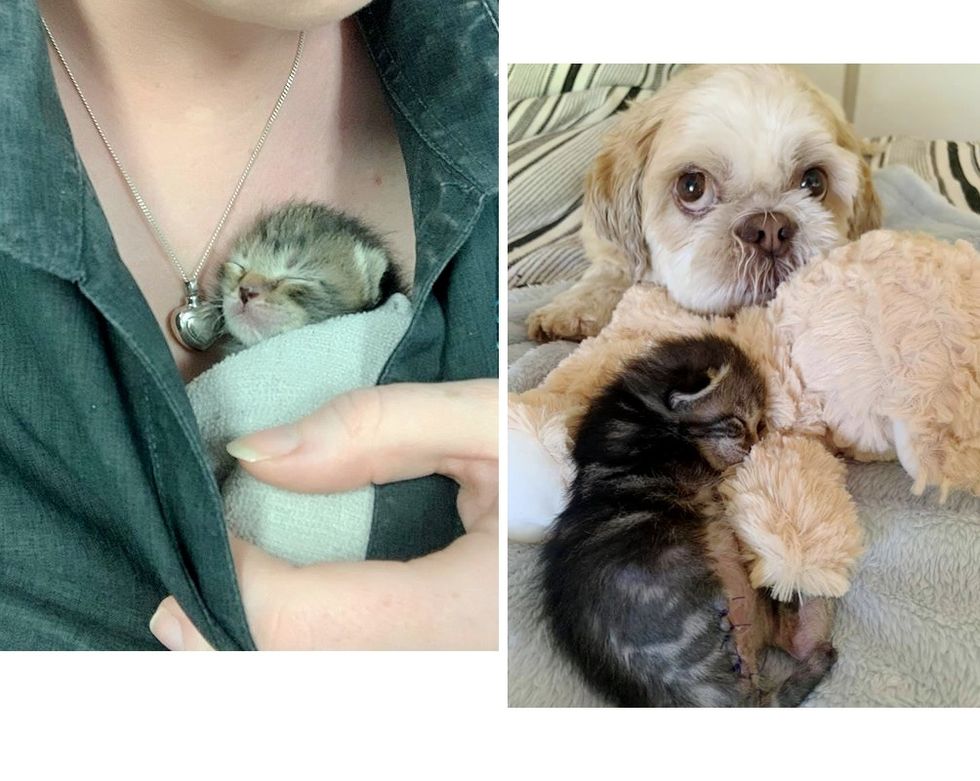 Last Thursday, a tiny kitten with an injury to her hind leg and tail was brought into Warwick Veterinary Hospital in Perth, Australia, for a chance at a better life. She was just a couple of weeks old, weighing only 172 grams. Despite being so small, the tabby hung in there with all her might.

Dr. Fiona South and her veterinary team saw the fight in her eyes and knew they had to try to save her, despite the odds. “With how strong she was, we were not giving up. The only choice we had was to amputate her leg sooner rather than later, as her leg was so badly infected and had started to essentially die, risking her going into sepsis,” Kate Hayes, a veterinary nurse, shared with Love Meow.

In just one day, the kitten already put on weight as if she was prepping herself for surgery. 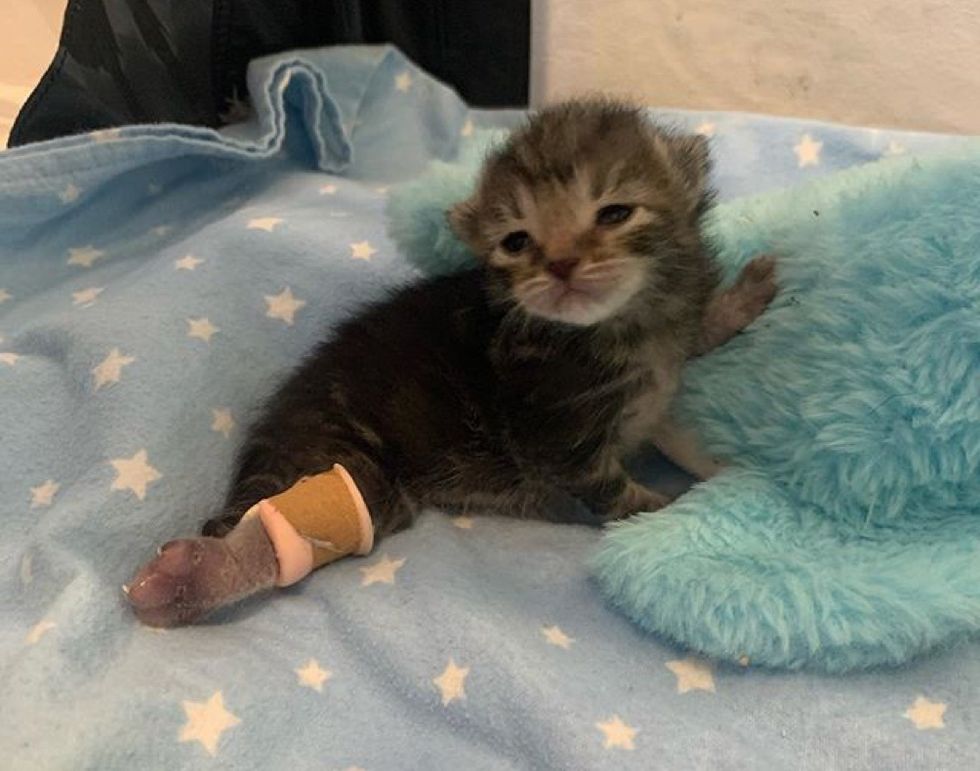 The little bundle of fur underwent the major operation, which was significant for a kitten her size and age. They didn’t know if she would pull through, but wanted to give her a fighting chance.

“I honestly didn’t think she would make it through surgery being so young and so small, but she did,” Kate added. 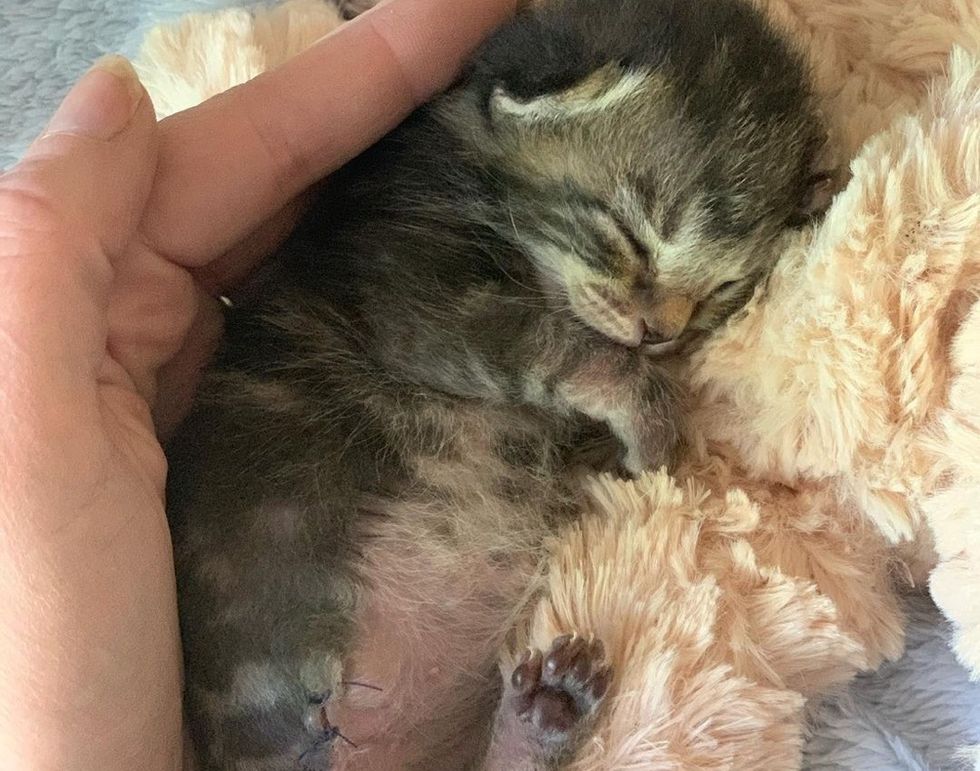 The tabby girl surprised them all with her tremendous will to live. She became the youngest kitten that the hospital had ever performed surgery on, let alone a major orthopedic procedure. The success was nothing short of a miracle.

“This little kitten is the epitome of strength. We are seriously blown away by her bravery,” Kate shared with Love Meow. “Her name is Peggy aka ‘Peg Leg’. She is now gaining weight and getting stronger by the day.” 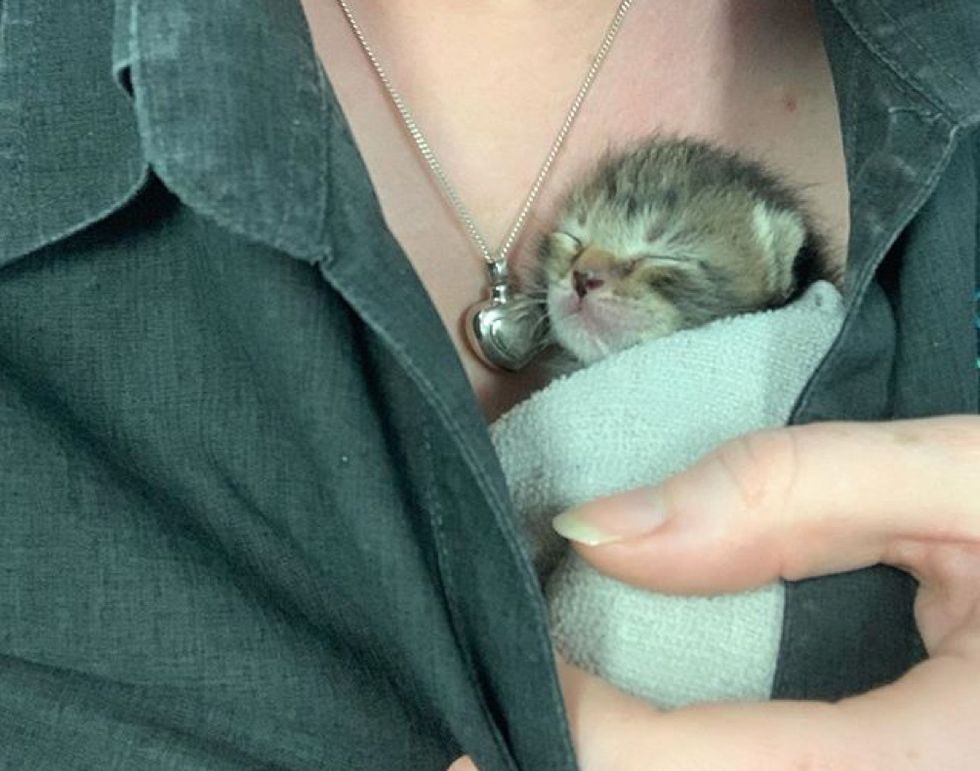 Kate volunteered to foster little Peggy, so the kitten could continue the healing process in the comfort of a loving home.

Her resident dog Moon who has a soft spot for kittens in need, immediately came to greet the new foster. 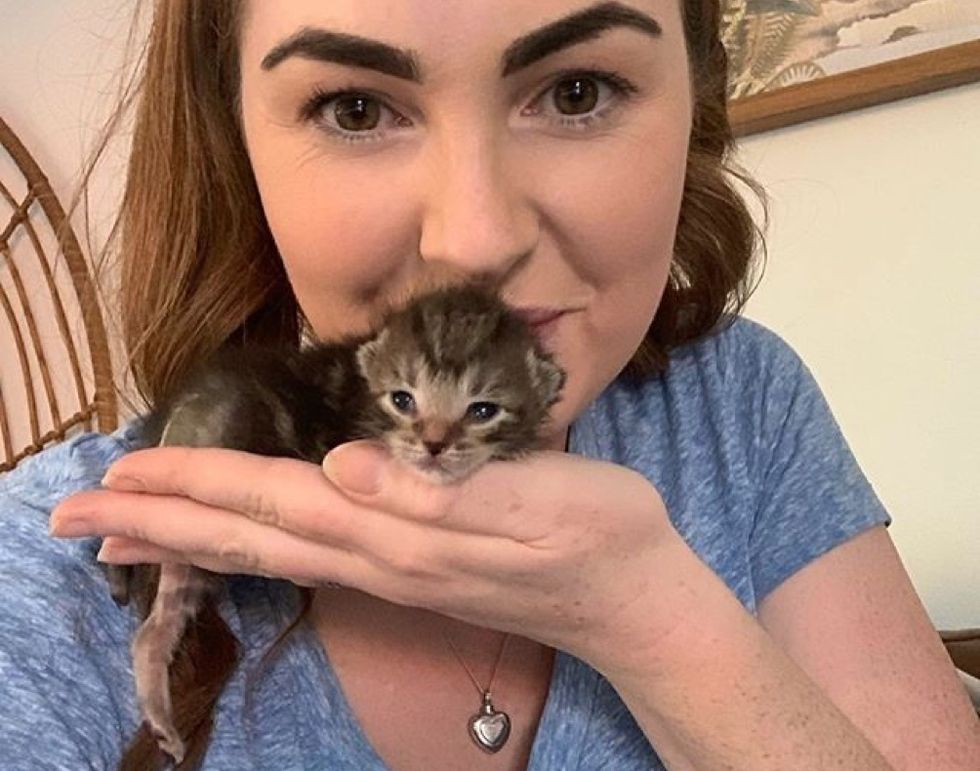 After a few sniffs, Moon could sense that the kitten needed some TLC. He lied down by her side and started watching over her.

“If an animal is crying or sick, Moon will stay beside them and cry with them. He has such a kind nature,” Kate told Love Meow. 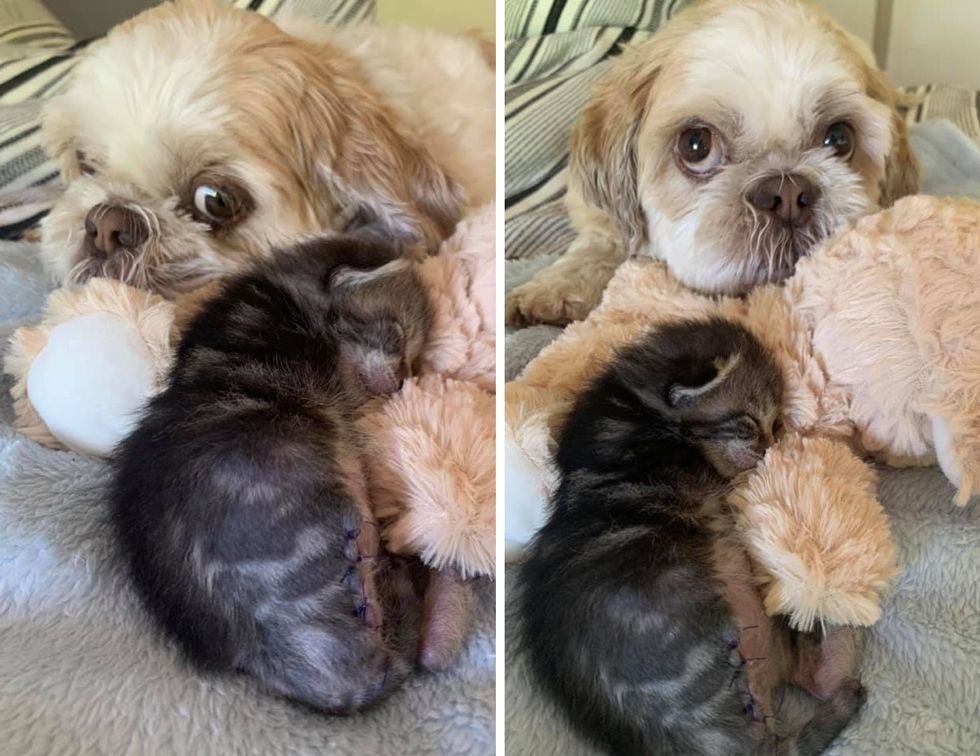 A few years ago, Moon helped Kate foster another 3-legged kitten named Phoenix. He kept her company and never left her side. Now that he has Peggy, Moon has made it his mission to help the little tabby recuperate.

Watch Peggy the kitten in this sweet video:

Whenever Moon hears Peggy’s cries, his ears perk up and he comes running to see if she is OK.

Moon adores every foster that Kate brings home and will nuzzle them gently and sit next to them until they fall asleep. 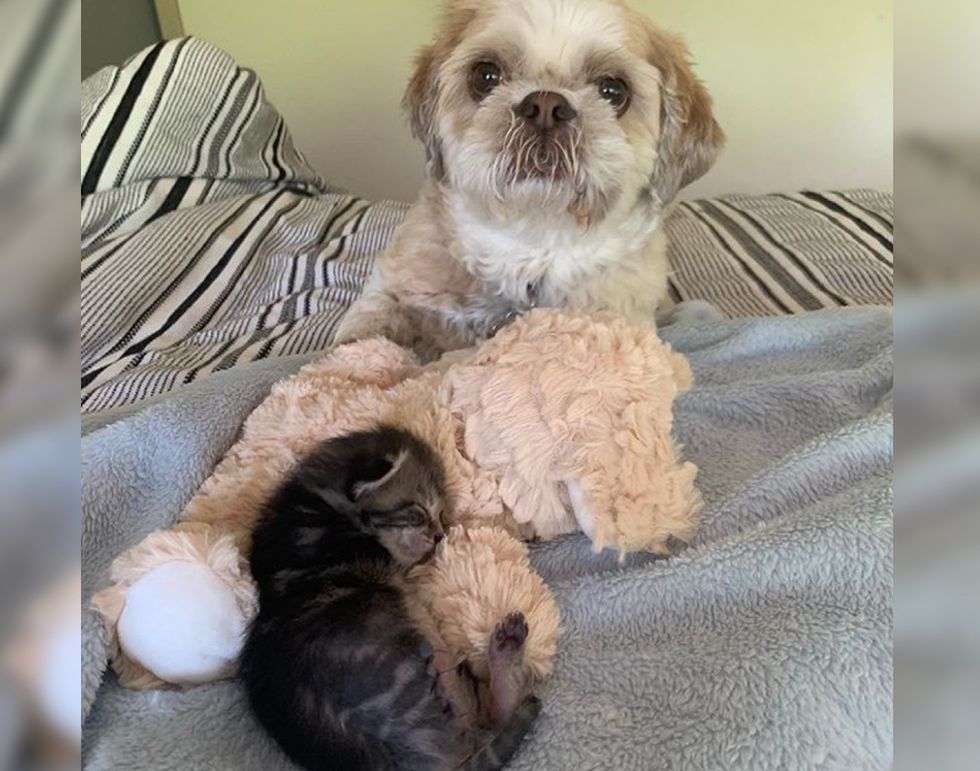 Peggy has been soaking up the love from her Foster Brother and is healing wonderfully. She likes to knead on the canine with her tiny front paws and bury her face in his fluff for some intense snuggles.

Moon is over the moon with his precious new baby and constantly showers her with licks. He insists on being there for her around the clock, making sure she is never alone. 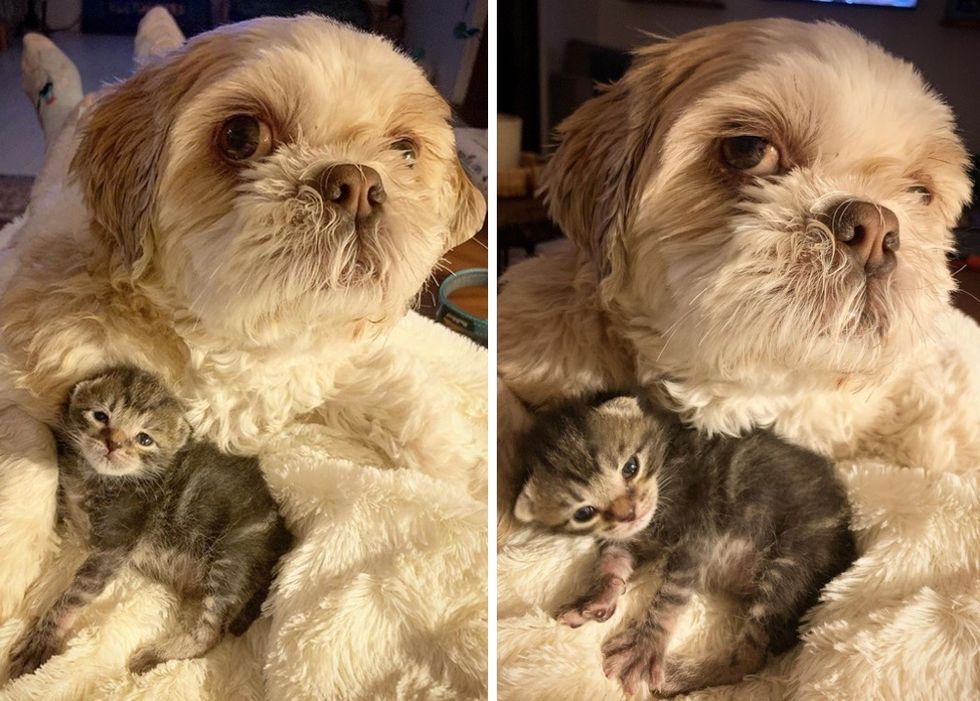 With a second chance at life, Peggy’s life was completely turned around. She is now recovering and thriving with a nurturing friend by her side. 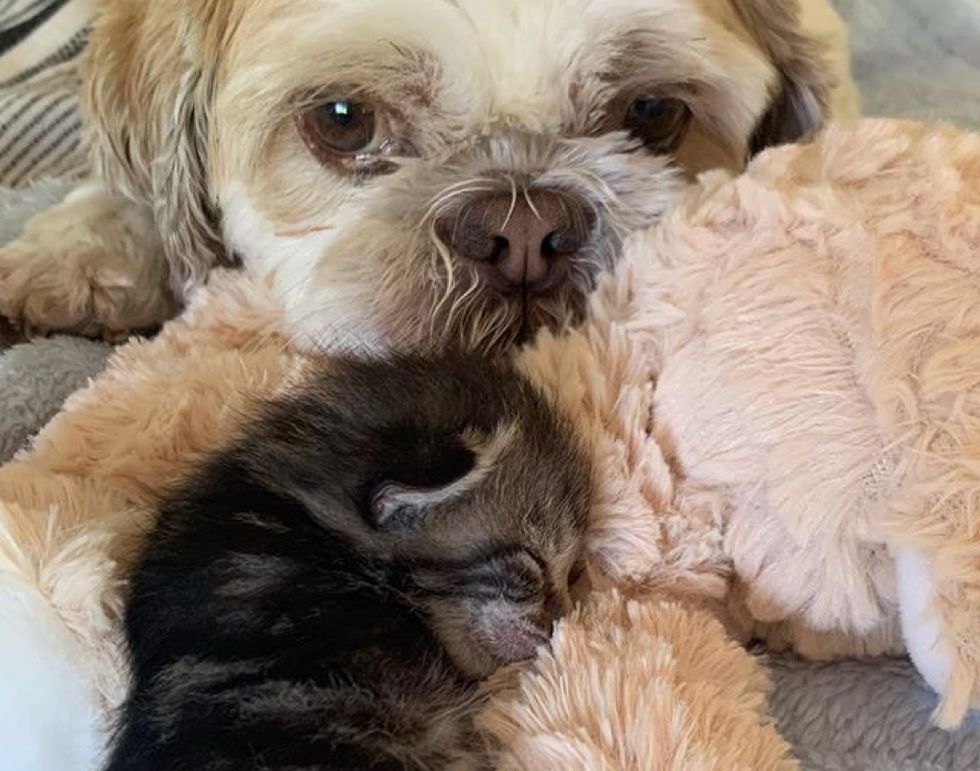 Related story: Dog Takes Stray Kitten Under His Wing and Raises Her into Beautiful Cat

Kitten Found Alone in Yard, Kneads Her Way into Hearts of Family

A sweet calico kitten kneaded her way into the hearts of a family after being found by herself in a backyard. Sarah Kelly @kellyfosterkittens A little kitten was discovered outside a resident’s home in North Carolina. The man who spotted her, looked around for other…

I think it’s fun when industry neighbors play nice together and this latest collaboration with PNW companies, Korkers and STLHD, is one part badass wading boot and one part branding fun.   The limited edition Korkers X STLHD Terror Ridge wading boots come with both studded…