A kitten found a wonderful family who not only gave him a home but also adopted his trusty cow. 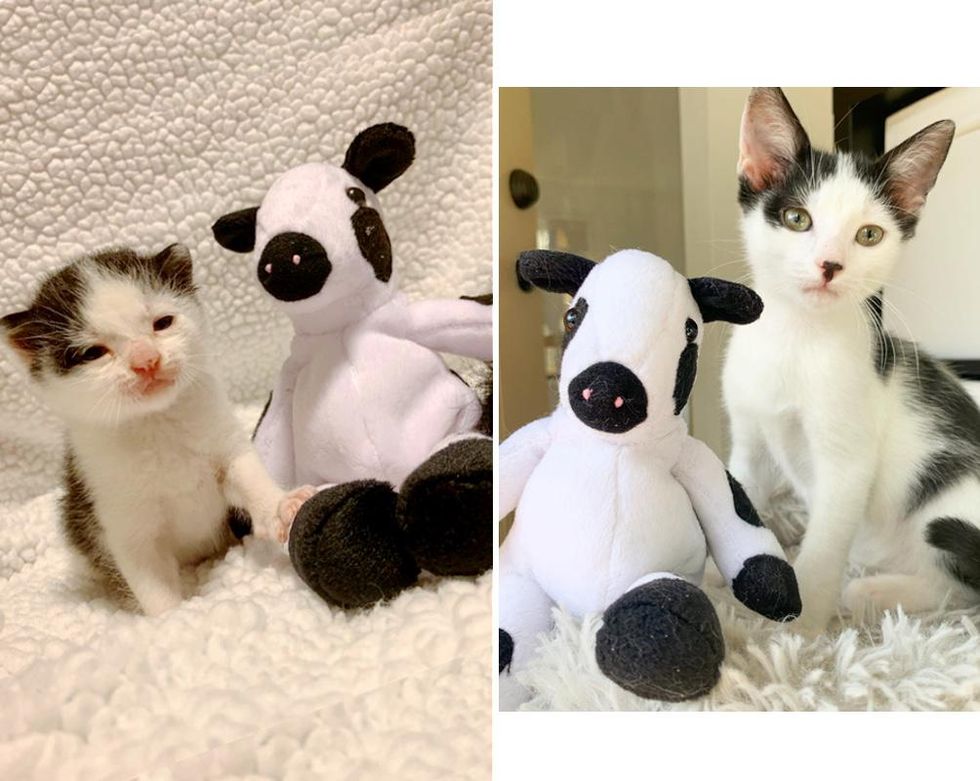 Workers at a construction site in North Carolina heard a kitten’s cries and located the tiny ball of fur in some rafters. Hoping that the cat mom would return, they decided to wait for her overnight.

The next morning, the workers came back to the crying kitten still all alone, and there was no sign of the mom. They reached out to their local rescue, Sparkle Cat Rescue, for assistance to save the kitten.

Sarah Kelly, a foster volunteer, responded to the rescue right away. She took the kitten home, placed him in an incubator to keep him warm. The kitty was so hungry that he quickly gobbled down the kitten formula, as if he hadn’t eaten for days. 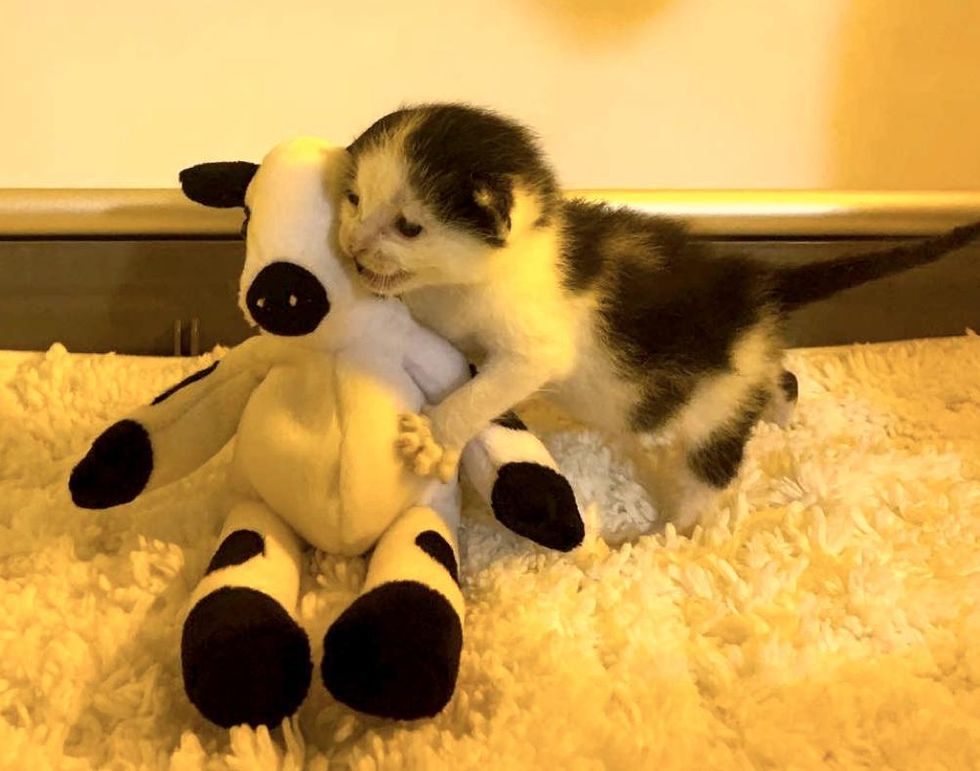 To make sure that the kitten didn’t feel lonely, Sarah paired him up with a friend — a cuddly cow toy that fit his size and matched his markings. Right away, the kitten waddled over to the cow, nuzzled up to it before purring himself to sleep.

The kitten named Bo slept soundly that night with a full belly and the company of his cow. As soon as he could stretch his legs more, he became increasingly more curious about the world outside the incubator. He started to use his big voice to command attention, and it worked every time. 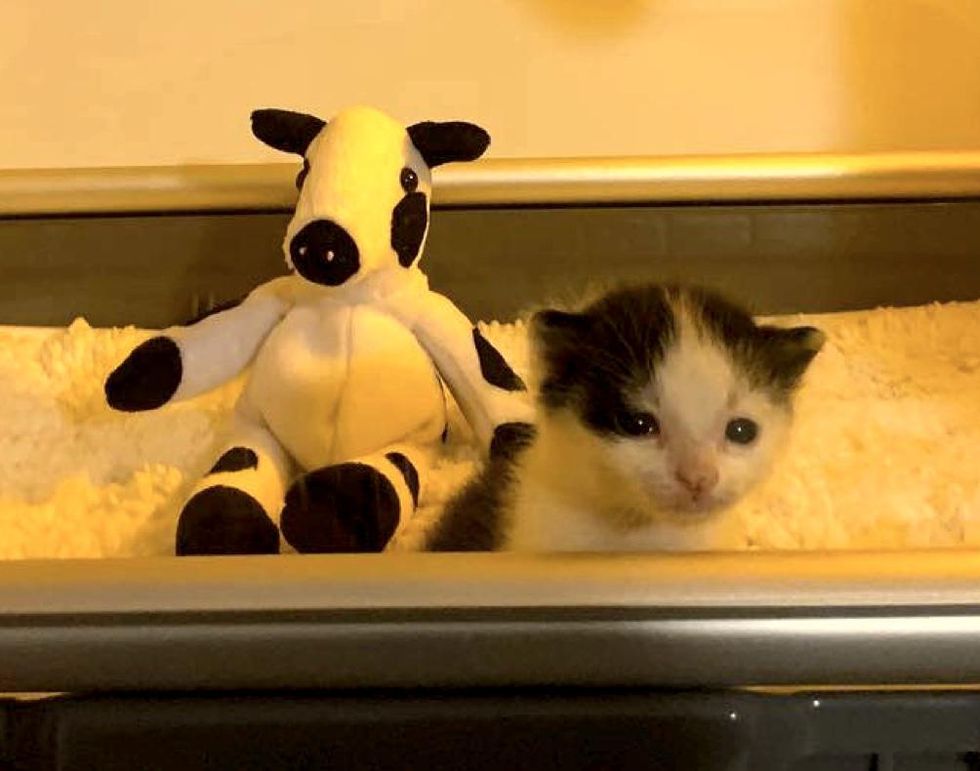 When Bo wasn’t napping with his trusty cow buddy, he insisted on being outside his cozy suite, perfecting his walk and playing with anything that moves.

The clever kitten was never shy of making his voice heard whenever he wanted something, and wouldn’t take no for an answer. 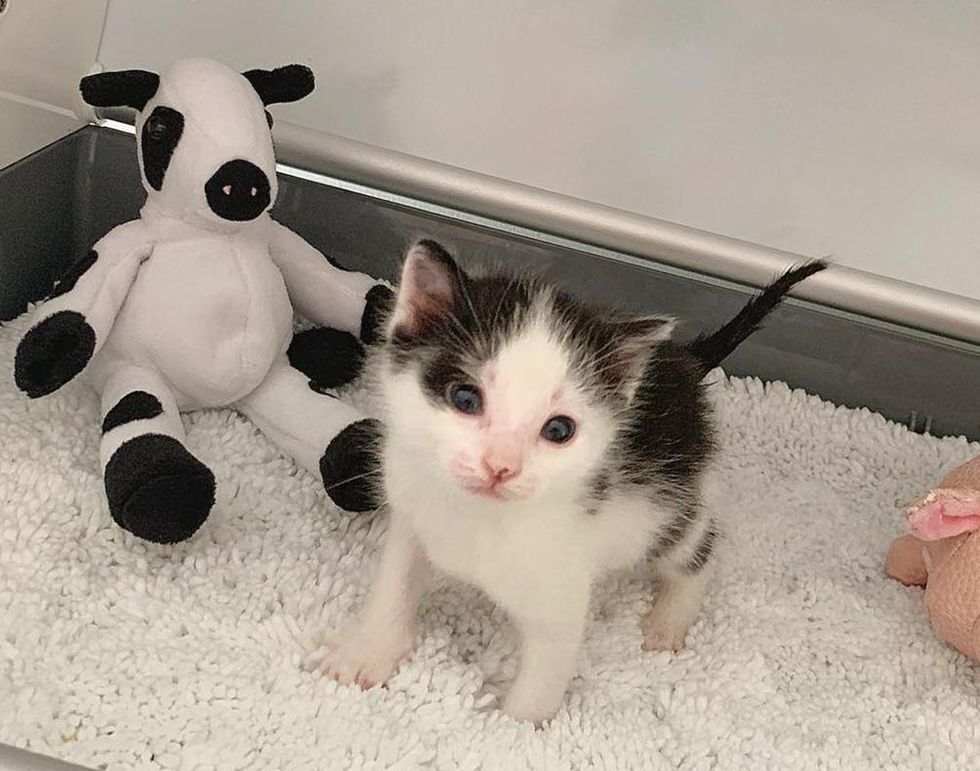 Bo graduated to a playpen and started to jump and run. He caught up in size with his cow companion and was introduced to other foster kittens, so he could have friends to roughhouse with.

After every intense play session, he would go back to his cow and conk out next to it. Eventually, Bo outgrew the toy but didn’t grow out of his habit of snuggling with it every night. 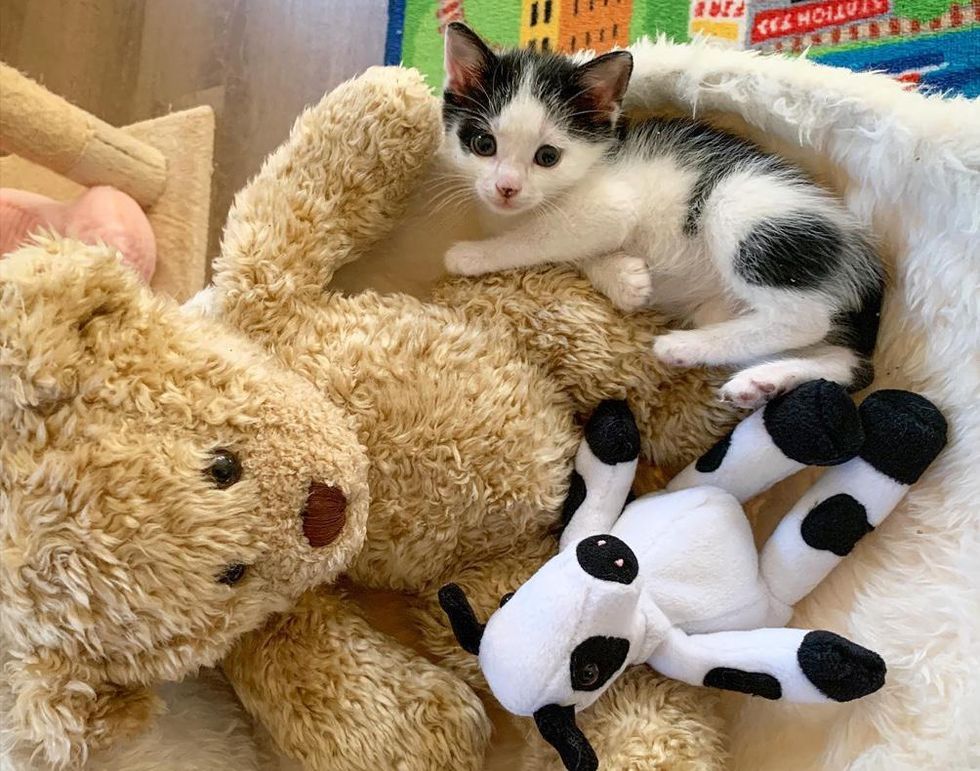 While Bo continued to hone his feline skills with the help of other kitties, Kenleigh Gilbert from Western North Carolina came across the little mischief-maker. She was instantly smitten.

Watch Bo and hear his meow in this cute video:

“I knew as soon as I saw him that he was meant to be my cat,” Kenleigh told Love Meow. 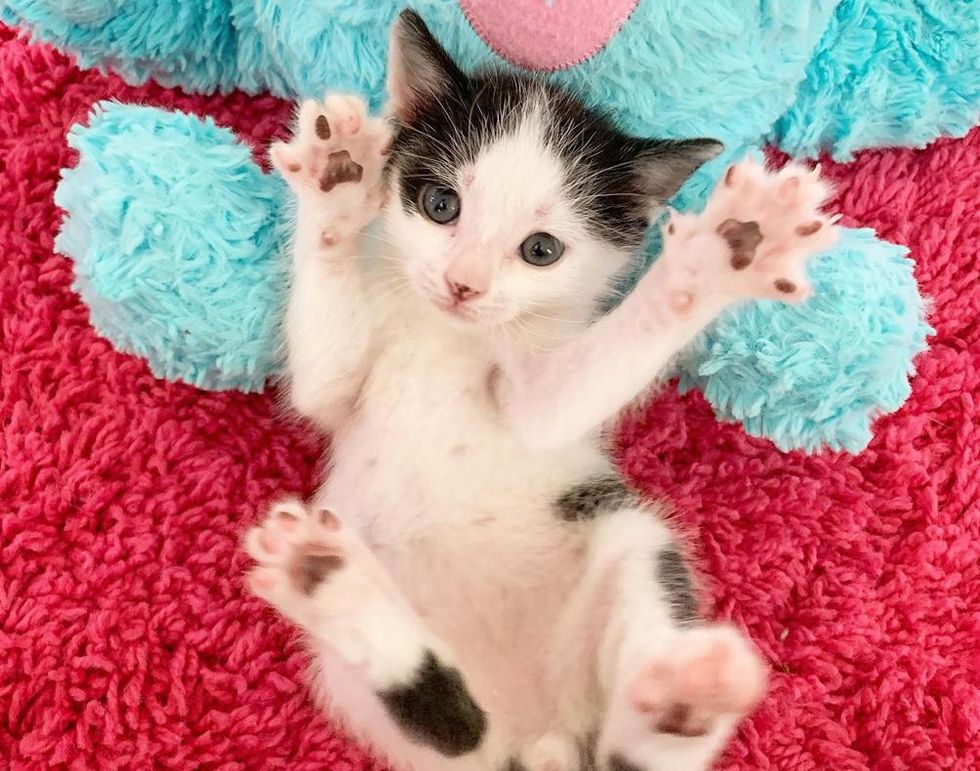 Earlier this year, Kenleigh lost her cat Sal due to an unknown illness. “He was my best friend as well as my Emotional Support Animal. I would occasionally just watch cat videos on Instagram to cheer me up, and one day I came across Bo. I remember gasping at how much he reminded me of Sal.”

“We applied for him and luckily got approved. I’m so excited to have him in my life.” 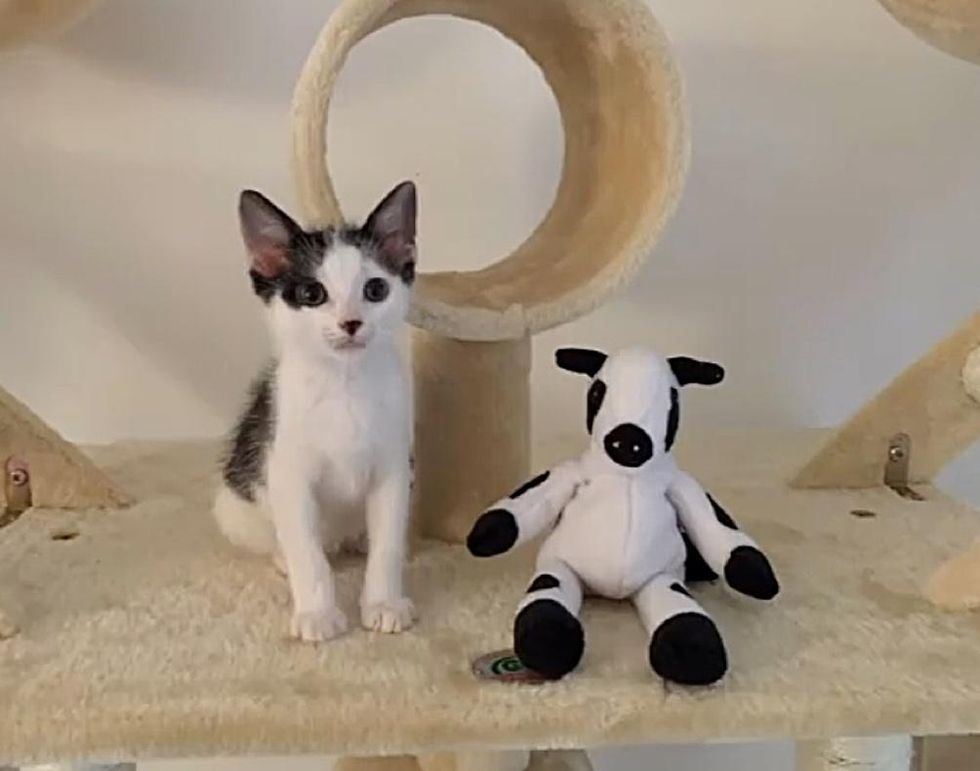 Bo has grown by leaps and bounds since the day he was found at the construction site. He got a cow toy to keep him company on day one, and has since blossomed into a serious love-bug and attention seeker.

When he was finally ready to spread his wings and fly, they knew the kitten and his cow buddy were a packaged deal. 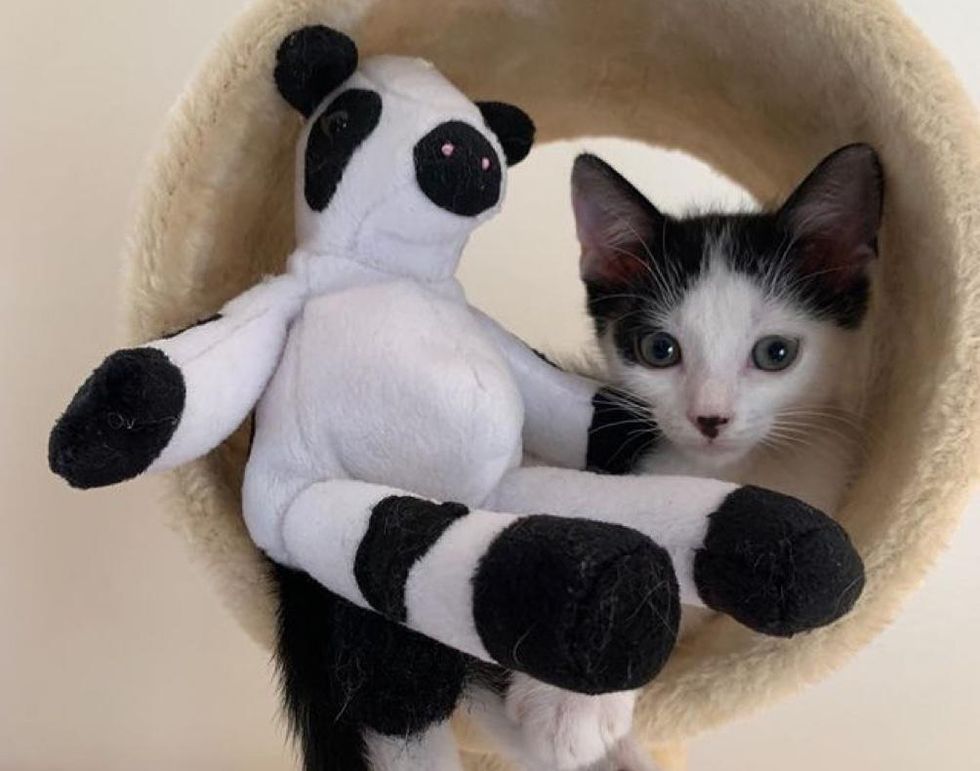 Yesterday, Bo and his little companion embarked on a new journey together with their forever family.

“He was cuddling with his cow all the way home,” Kenleigh shared with Love Meow. “His name will continue to be Bo to honor where he came from, but we decided on his full name being Bowie Purroughs.” 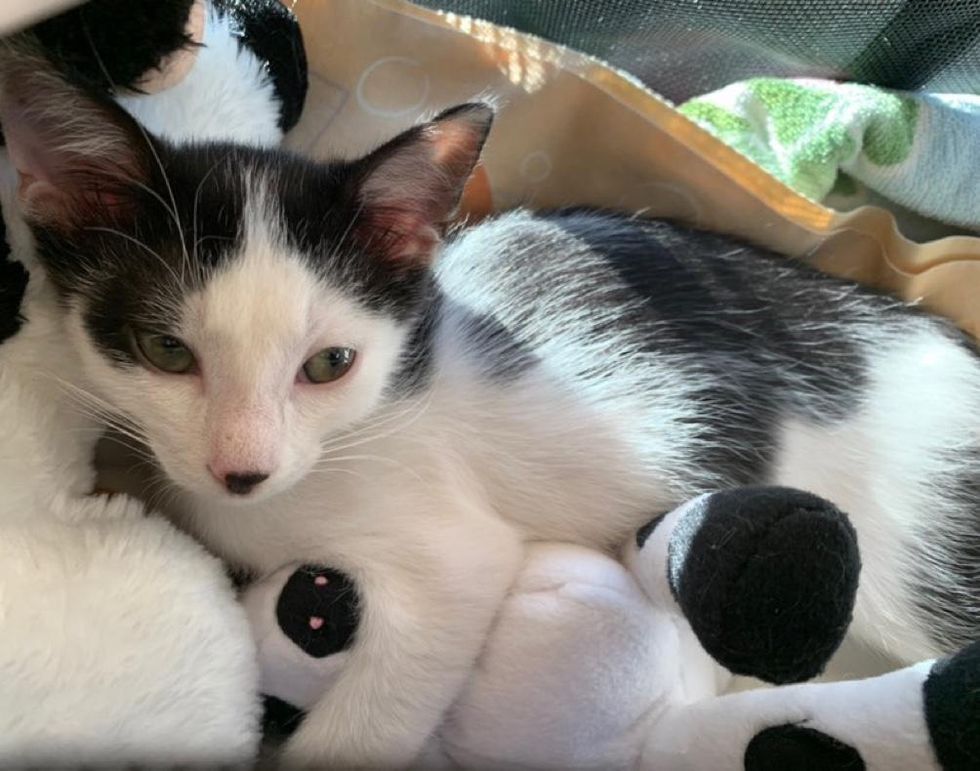 After exploring around his new abode, the sweet kitten settled right in. He played with his new wand toy and climbed the cat tree. He was in love with his big fluffy bed and started kneading away in pure bliss.

On his first night home, Bo slept comfortably with his forever human. 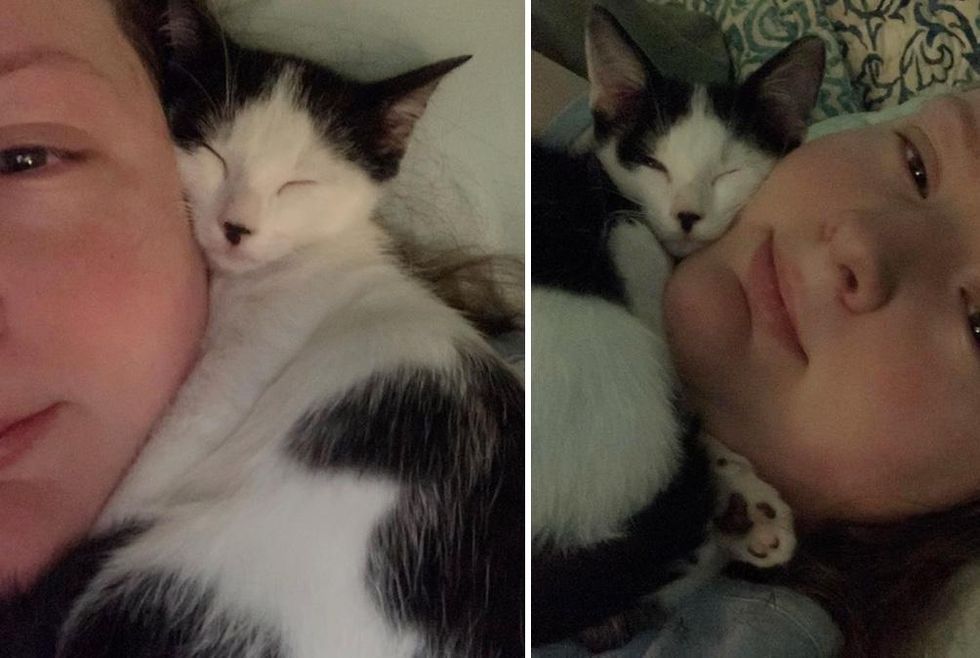 Now that Bo gets to be the center of attention on demand, he spends more time with his humans, purring and making biscuits (kneading) all the time.

His trusty friend, the cow, is always nearby and ready to cuddle. 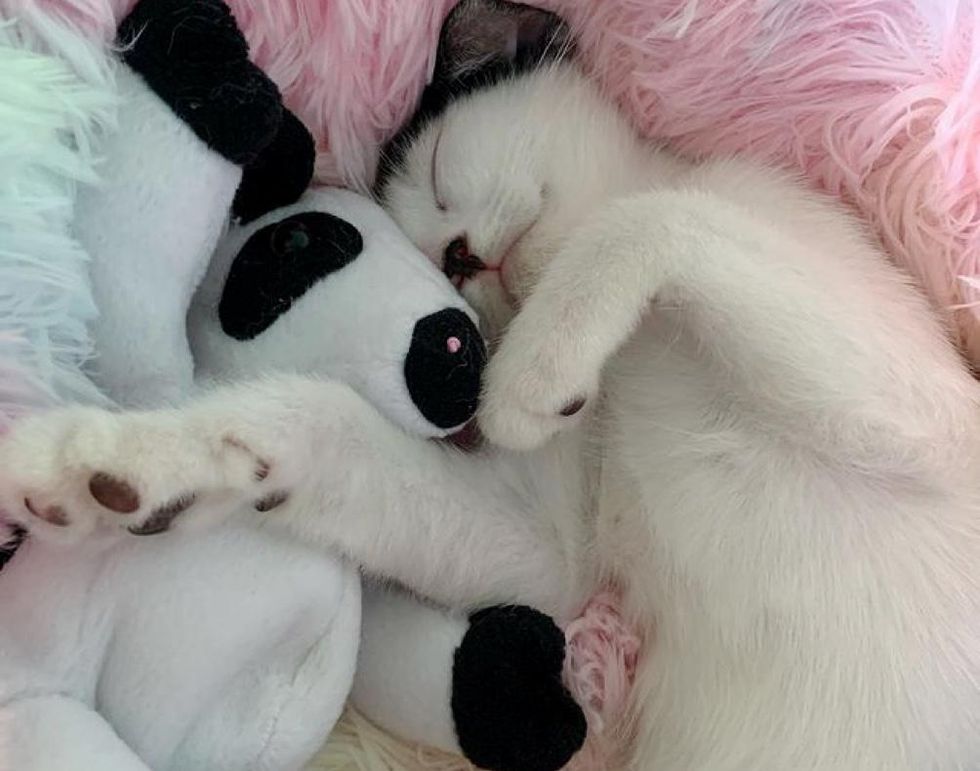 Related story: Kittens Found Under House, Bounced Back and Blossomed Through Help from Big Family