I kind of got ahead of myself with the last ‘Good Eats‘ post which detailed our salmon cakes recipe since the main ingredient is already having salmon that has been grilled and then flaked.  I wanted to share a quick and easy marinade that we use which is great for the salmon cakes and just as good for a stand-alone salmon preparation.

You might notice the WhistlePig maple syrup in the photo below which arrived on my doorstep as part of a care package that I’ve been using in the kitchen this summer.  This is great Vermont maple syrup.  Thanks again, Whistlepig.

For reference, I’m doing the recipe math off of a single salmon filet and not two as in the photograph above.  Also, in the recipe below, going heavy on the maple syrup will make it sweeter or heavy on soy will send the overall taste that way.  We like it sweeter so we double up there.

Mix all the ingredients in a bowl and it’s ready.  Wasn’t that easy?

I usually cut the salmon filet into four to six serving size pieces and pour it into a sealable bag.  Move the pieces around so that every piece covered with the marinade.  Place in the refrigerator and every so often move the filets around within the bag to reposition them.  A couple of hours to a half of a day is perfect for this marinade to set in. 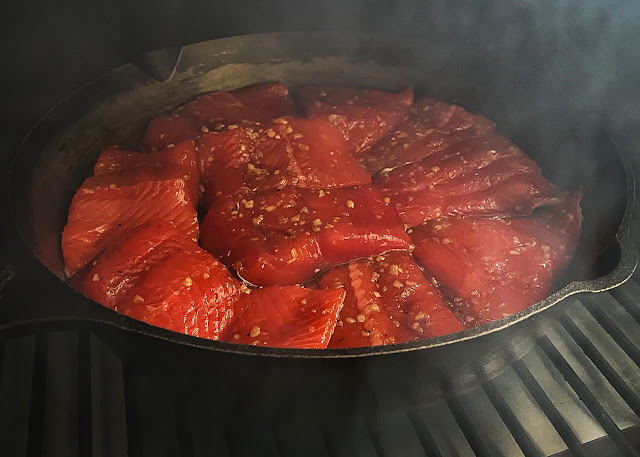 As far as grill preparation, I’m use our Traeger PRO 575 grill with Signature Blend pellets for this meal.  Pre-heat your grill to 350 degrees and once you put them on, keep an eye on them as they don’t take long to fully cook. As soon as the salmon filets lift from its skin and flakes apart, it’s done.

A few notes on placing the filets on the grill grates versus using a cast iron pan.  You will get more direct heat to the filet by placing it on the grates but damn, more times than not, the skin from the salmon filets will fuse to the grate and aren’t always that easy to scrape off.  The filets will cook off more of the marinade and depending on how much sugar is in your marinade, will candy up a bit.

Lately, I’ve been using a Smithey No. 12 Cast Iron Skillet which doesn’t give you that same char or candy on the edges but keeps all the drippings and skin mess from your grill grates and catch, if you’re using a pellet grill.

So, personal preference on that a bit.  If we’re using the filets for salmon cakes I’m more apt to use the cast iron pan but if we’re eating them as our meal, they usually go on the grill grates.

Lastly, I’ve said it before and I’ll say it again, please be choosy about the type of fish you are eating and serving your family.  Seek out and only eat wild-caught salmon.  It’s sustainable and if you only knew (and maybe you do) the enviromental damage that salmon farms are putting on wild places, you’d likely never eat it again. Want to learn more?  Artifishal and Salmon Confidential are great primers to get you caught up to speed.

The availability of fresh wild-caught salon is waning as summer winds down but there are other ways to source it if you look around a bit. There are even ways to join co-ops in Alaska for direct to consumer methods of sourcing your wild-caught dinner.