The call of the New Guinea singing dog sounds like a wolf’s howl crossed with a whale song. It’s  haunting, beautiful, and rare. So rare, in fact, that no one has heard it in the wild since the animals went functionally extinct in the 1970s.

Or so we thought.

In fact, the wild dogs were pushed to high altitudes. Scientists have found evidence of their unique DNA at 14,000 feet above sea level on the island of New Guinea. They detailed the discovery in the Proceedings of the National Academy of Sciences.

The dogs are currently classified as a breed of domestic dog by the IUCN, and therefore not considered threatened. In contrast, the new study posits that these dogs maintain enough genetic and behavioral differences to be considered a distinct … Read the rest

The U.S. Department of Transportation Enacts New Rule Stating That Airlines Will No Longer Be Required To Transport Emotional Support Animals

During a time when emotional support animals are needed more than ever, the  U.S. Department of Transportation (DOT) today announced that it is revising its Air Carrier Access Act (ACAA) regulation on the transportation of service animals by air to ensure a safe and accessible air transportation system.

Under the new rule, airlines will now recognize emotional support animals as pets, rather than service animals.

As per the DOT, the Traveling by Air with Service Animals final rule “defines a service animal as a dog, regardless of breed or type, that is individually trained to do work or perform tasks for the benefit of a qualified individual with a disability, including a physical, sensory, psychiatric, intellectual, or other mental disability.”

When Jill Stewart decided to adopt a Golden Retriever, she did it to save a disabled dog from China’s dog meat trade. But when the North Carolinian flew to Shanghai to meet her new pup, she learned more about the grisly fates awaiting dogs in China, where canines are routinely maimed, beaten, and killed in markets, restaurants, and slaughterhouses operating under the belief that torture yields the best meat.

“At that point, I said, you know, I just don’t really want to stop there,” said Stewart, who partnered with her dog’s rescuer and raised $7,000 to rescue 5 additional dogs on a GoFundMe page. But despite this achievement, Stewart couldn’t rest easy – not when hundreds of thousands of dogs were being cruelly killed every year. “You know, I just don’t think I want to stop there,” the nurse decided again, this time resolving to start a non-profit – a … Read the rest

Last year, the bipartisan Big Cat Public Safety Act (H.R. 1380 and S. 2561), which prohibits the ownership of big cats and makes it illegal for exhibitors to allow public contact with cubs, was introduced by Congressman Mike Quigley of Illinois, along with Rep. Brian Fitzpatrick of Pennsylvania.

According to Animal Defenders International (ADI), the life-saving bill is scheduled to go before the House of Representatives tomorrow, December 3rd. The bill needs a two-thirds majority to advance. That is why it is imperative that we answer ADI’s call to action today, which we have included below.

Tragically, throughout the United States, thousands of big cats such as: tigers, lions, leopards, and pumas are kept in miserable, insecure, and unsafe conditions by irresponsible owners. The Big Cat Public Safety Act works to address this issue by banning the private ownership of these animals and prohibits exhibitors, such as roadside zoos, from

There’s a new bridge over Utah’s Interstate 80. It’s 50 feet wide and 320 feet long, covered in rocks and logs and is now gaining national attention–not because it’s a hassle for humans but because it’s incredibly useful for wildlife.

Completed in 2018 by the Utah Department of Transportation, the wildlife overpass provides a safe path over a previously precarious stretch of highway. Its location was chosen as the prime spot to accommodate migratory populations. Recent video evidence shows that the UDOT made the right choice. Footage recorded by the state Division of Wildlife Resources has shown dozens of animals crossing the bridge.

According to the Smithsonian, wildlife experts thought it might take several years before the overpass saw some use. The DWR footage says otherwise, with proof of deer, … Read the rest

This holiday season it is more important than ever to make healthy choices that save the lives of millions of innocent animals by simply leaving them off your plate. To help spread this critical message, Peace 4 Animals and World Animal News (WAN) have launched another impactful billboard campaign to encourage people to go plant-based.

“If 2020 has taught us anything, it is that significant changes must be made in order to save our planet and all of the sentient beings that inhabit it,” said Katie Cleary, Founder and President of Peace 4 Animals and World Animal News. “There needs to be a cultural shift in the U.S. and throughout the world to change the way we are conditioned to think about ‘farm’ animals. One that includes recognizing animals as individuals, not deserving to be exploited and killed for human consumption.”

Fighting Monarch Caterpillars May Show Us How To Save The Species

Monarch butterflies are as beautiful as they are delicate.

Before reaching that stage, however, they begin as ravenous brutes, willing to chew anything and everything in their way.

Before metamorphosizing into their final form, monarch butterfly caterpillars allow absolutely nothing to get between themselves and food, not even other caterpillars. According to the New York Times, when two caterpillars find themselves fighting over the same source of food they become tiny terrors. They will attempt to bump, tackle or push the other away.

“I went to grad school with a guy who played rugby in college,” Alex C. Keene, a neuroscientist at Florida Atlantic University and author on a study on caterpillar aggression, told the New York Times. “A flying head butt is a fair assessment.”

Obviously, this is behavior they grow out of once they become adults. But it’s fascinating science, … Read the rest

Cher Helps Kaavan, The World’s Loneliest Elephant, Finally Relocate From The Marghazar Zoo In Pakistan To The Cambodia Wildlife Sanctuary

Kaavan, the world’s loneliest elephant, has finally been relocated from the Marghazar Zoo in Islamabad, Pakistan, to the Cambodia Wildlife Sanctuary, with global animal welfare organization FOUR PAWS International overseeing the transfer.

Last month, the Islamabad High Court appointed Dr. Amir Khalil, veterinarian at  FOUR PAWS, as amicus curiae and assigned him with the logistical organization of Kaavan’s relocation, along with the support of the NGO Free The Wild.

As WAN reported in 2017, Free The Wild’s Co-founder, music legend Cher, has been fighting for Kaavan’s rescue since 2016.

A Russian cargo plane and a four-ton transport crate that was able to hold a wild elephant are just some of the things that FOUR PAWS had to organize for Kavaan’s departure. 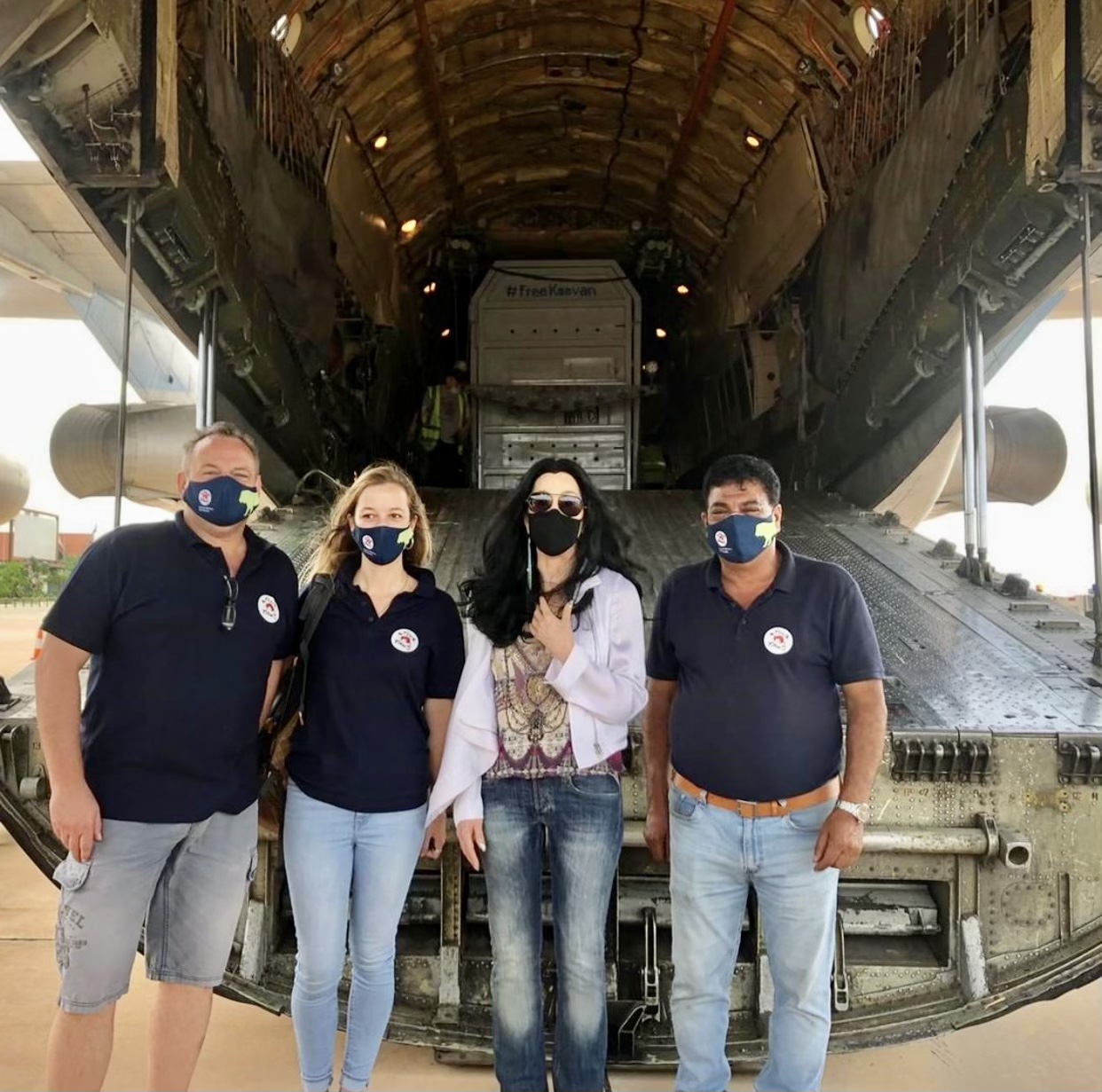 For FOUR PAWS, the rescue of Kaavan was their first elephant transfer by air. Worldwide, only a handful

Mike Korostelev, 38, was diving in the Indian Ocean when he saw a mother sperm whale feeding her calf.

As the calf neared its mother, the massive whale’s mammary glands ejected a stream of milk into her child’s path. The calf fed on the milk underwater without latching on.

According to Scitable by Nature Education, the nipples of sperm whales are inverted so their calves need only swim near the cavity and nudge to feed on the go. This is an easier alternative to latching, which is difficult considering the shape of young whales’ mouths.

“In a way, nursing underwater is therefore similar to nursing above water: the baby stimulates the mammary glands to eject milk, and then … Read the rest

See ‘The Most Fish Ever Recorded On Camera’ At Nearly 10,000 Feet Below The Ocean Surface

A world record was just set in near complete darkness, more than 9,800 feet below the surface of the Pacific Ocean. It took a little coaxing, but with some mackerel and a strategically placed floodlight, scientists were able to capture video of the most fish ever recorded in one shot.

In this case, it was a writing mass of 115 Ilyophis arx, cutthroat eels.

“Our observations truly surprised us,” said Astrid Leitner, a biological oceanographer and lead author on the study, who conducted this work as graduate researcher in the UH Mānoa School of Ocean and Earth Science and Technology (SOEST). “We had never seen reports of such high numbers of fishes in the sparsely-populated, food-limited deep-sea.”