13 Foods To Avoid Giving Your Dogs On Thanksgiving

Thanksgiving has arrived and this holiday may come with a number of unexpected issues. No, we are not talking about those pesky in-laws.

This year, we are expected to have smaller celebrations because of the ongoing pandemic, but we can celebrate within our households which means our dogs are still invited. Unfortunately, there are a number of dog owners who are unaware of some foods to avoid giving their dogs.

Dogs have a way of making us feel terrible for not sharing our food with them. When they do their cute little beggar routine, it is tempting to simply give them a bit of whatever we are having. However, there are a number of holiday foods that are simply not good for dogs. The American Kennel Club has prepared a helpful list for anyone who is looking to keep their pet safe this year.

Breaking! Ricky Gervais Teams Up With In Defense Of Animals For Fur Free Friday; Calls For Saks & Neiman Marcus To Stop Selling Fur!

In Defense of Animals has joined forces with world-renowned animal advocate and comedian Ricky Gervais to educate shoppers about the true cost of fur and to encourage major retailers to ban fur sales for Fur Free Friday on November 27th.

In Defense of Animals has been fighting against the fur trade since the 80’s, and helped create the longest-running animal protection demonstration in the world. Fur Free Friday events take place every year on Black Friday, the busiest shopping day of the year. Animal advocates come together to help educate the public about the fur industry and the animals it harms in the wild and on fur farms. This important campaign calls for an end to the cruelty inherent in the fur industry.

This year, due to COVID-19 concerns and restrictions, In Defense of Animals has coordinated a virtual Fur Free Friday event with the help of comedian and animal

Birds are fascinating creatures with some beautiful plumage. It is no wonder that they are often favored subjects of nature photographers. For Tim Flach, a London-based photographer, birds are the perfect subject for him to capture unique and expressive personalities. He likes to photograph birds as his portrait subjects because they provide the viewers a glimpse into another world.

And some of his bird subjects aren’t your garden variety species either. Some of the birds that he has managed to capture are very rare and very beautiful species, such as the Peruvia Inca tern and the Toco toucan, also referred to as the giant toucan.

The photographer also happens to be quite fond of the Inca tern’s look which he refers to as the “Salvador Dalí of the bird world” with the feathered white mustache that runs across his face. Compared to this is the Toco toucan’s bold beak with … Read the rest

In a report released yesterday, Oceana reveals data on marine mammals and sea turtles becoming entangled and swallowing plastic off the coast of the United States. After surveying dozens of government agencies, organizations, and institutions that collect data on the impact of plastic on marine animals, Oceana found evidence of nearly 1,800 animals from 40 different species swallowing or becoming entangled in plastic since 2009.

Of those, a staggering 88% were species listed as endangered or threatened with extinction under the Endangered Species Act. Perhaps even more concerning, Oceana says that the animals reflected in this report are far fewer than the true number of sea turtles and marine mammals that consume or become entangled in plastic in U.S. waters.

“Before now, the evidence that many U.S. marine mammals and sea turtles were being harmed by plastic was not compiled in one place. While there may never be a complete

A litter of newborn puppies dropped off at a library in Washington are now looking for homes.

The puppies were found when an animal control officer with the Hoquiam Police Department received a call from the local library, KIRO 7 reports. Someone had left the dogs in a box near the front door.

There were few clues that could possibly identify the individual or group who dropped the puppies off. At just a few days old, the puppies would surely have suffered had no one called animal control.

The Harbor Rescue animal organization stepped up to take the puppies in and put the story out on social media.

“HEADS UP, Harbor Rescue Followers! We just got in 8 about 4 day old puppies and will need help with supplies and vetting funds,” the rescue … Read the rest

New Report Reveals USDA Is Failing The 9.6 Billion Turkeys & Chickens Who Are Killed At Slaughterhouses Each Year

The inadequate, haphazard oversight by the United States Department of Agriculture (USDA) of the treatment of chickens and turkeys at slaughterhouses has resulted in the widespread mistreatment and suffering of birds at some of the nation’s largest plants, with no real consequences for the meat companies, according to new research released on Friday by the Animal Welfare Institute (AWI).

AWI’s report reviews USDA inspection records from 2017 through 2019 at approximately 300 federally inspected turkey and chicken slaughter plants, which kill the vast majority of the 9.6 billion birds butchered every year for their meat.

The USDA has gradually increased the number of handling records issued for noncompliance with ‘good commercial practices’ (GCP) at chicken and turkey slaughter plants over the past 14 years. However, during the recent three-year period, inspectors took action to stop the abuse of birds in only 14% of the documented incidents.

Although the slaughter of

Dogs React To ‘Raise The Woof,’ The World’s First Holiday Song For Dogs

Do you cheer with jingling bells when holiday music takes over the airwaves the day after Halloween, or would you rather bah humbug until spring?

No matter which camp you’re in, now you can share the spirit with your dog. For the first time in history, a Christmas single written and performed just for dogs has just been released. It’s called “Raise the Woof.”

According to dog food company Tails.com, “Raise the Woof” isn’t just another novelty.

“We did some digging, and based on scientific research (our music producers played over 500 sounds to 25 dogs in a digital focus group) we found the secret to dog pop,” the website states.

In a collaboration between government authorities, the scientific sector, local communities, and the International Fund for Animal Welfare (IFAW), a juvenile jaguar has been successfully released back into the wild after being critically injured following a vehicle strike near Chetumal, Mexico, on June 11th.

The injured jaguar was transferred to the Payo Obispo Zoo to begin the rehabilitation process where he was monitored and cared for by an extensive multi-disciplinary team that later named him ‘Covi.’

Upon examination, it was discovered that Covi, estimated to be approximately 18 months old, had sustained a fracture to his left shoulder blade and additional lacerations to his body. Though his prognosis was still good, critical to Covi’s recovery was the team’s ability to monitor and care for him (following the fracture) with minimal human interaction, made possible by a network of cameras and the use of spacious enclosures to promote more natural behavior.

This heartwarming story is proof that you should never give up hope. While it starts off with a devastating loss, it has a happy ending.

It all started in 2012 when Stevie Rodger’s two dogs, Kavik and Konan, were let outside of his home in Scotland to go to the bathroom, but slipped out of the gate. He searched the area and discovered they had wandered onto a farmer’s sheep field.

The farmer callously shot both the dogs, instantly killing Konan. Kavik was injured but took off running.

The family searched the area for months, posting signs and offering a reward, but to no avail. They even made a post on Dog Lost, listing his last seen location and two phone numbers to call with any information. “Kavik is his daddy’s boy and may not come when called by another person. If you see him please … Read the rest

A tiny saw-whet owl is now recovering at the Ravensbeard Wildlife Center in New York after being found in the Rockefeller Center Christmas tree.

It all started when a 75-foot Norway spruce was cut down on Thursday in Oneonta, New York, for Rockefeller Center’s Christmas display. It was then when a worker for the company that helped transport the tree, noticed the small owl.

According to a post on Ravensbeard Wildlife Center’s Facebook page, the worker’s wife had contacted them asking if they took in owls for rehabilitation, thankfully they did.

After the tiny owl, who has now been named Rockefeller, was turned over to the wildlife center, they immediately performed a health check. Despite his 170-mile journey, he appeared to be in good health. 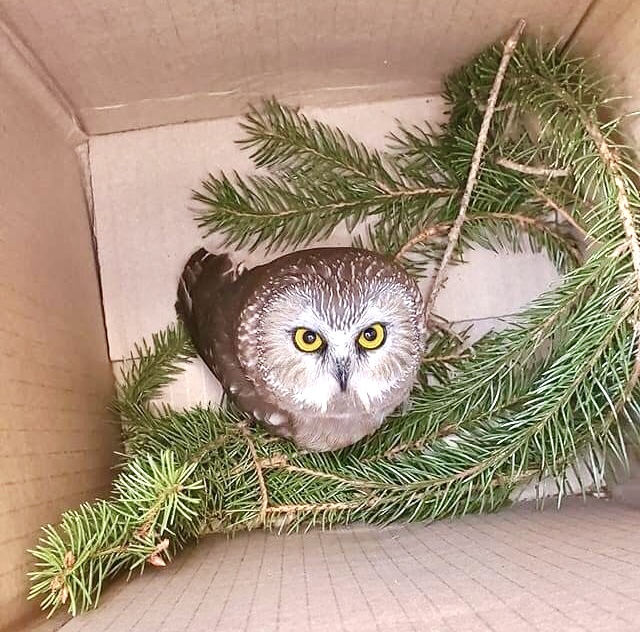 “We’ve given him fluids and are feeding him all the mice he will eat. It had been three days since he ate or drank anything.