The other day Nathan Fulcrum’s Blue Halo seven weight fly rod build popped up on my Instagram (#glassisnotdead posts are over 64,000 and growing…) feed and I was kinda blown away by it.  Not only did it feature some fancy “carp scale” decorative thread wraps on the butt section of the fly rod but he also tapped Tim Johnson for a one-of-a-kind Timmy Grip and an airbrush art fly rod tube by Scaly Designs.  It all came together as something pretty special.

Lastly, from a performance standpoint, the Blue Halo Retroflex 3 seven weight continues to be my personal favorite from the line-up and perfect as a dedicated carp fly rod.

Nathan wrote…  “As for the story and inspiration behind it, that’s a bit of a rabbit hole. I’ve been building rods for several years now mainly for personal use, with the occasional friend or family project in between. It’s been a hobby up until this point to which I’ve spent countless hours trying to gather as much knowledge from other builders as I could. This included scouring forums, videos, Facebook groups, and basically any other means of information I could get my hands on. Through success and failure over the course of several dozen builds I’ve figured out a pretty consistent process that works for me. However, I’ve always wanted to find something that could make my builds a little different and unique. So, some of the best inspiration for me came from one group in particular, and that was the NERBs (North Eastern Rod Builders). I was always amazed with the super intricate thread work that those men/women were able to produce, mainly on big offshore style rods. I felt that by learning this technique I could incorporate it to help distinguish my work in a way not really seen before, and specifically on glass rods. Glass naturally has larger diameter butt sections making them more ideal for these types of decorative wraps. With so many colors and manufactures of modern glass blanks, the possibilities are quite endless.

My take with glass (and potentially the fishing community in general) is there seems to be primarily two groups. Those who want clean, crisp, classic, no-frills style looks, but still want something that isn’t a mass-produced product. And those that want bright, loud, statement-making builds that can represent their interests or extensions of themselves. I’m a fan of both styles and wanted to be able to provide something that could satisfy both ends of that spectrum. I’ve been inspired by numerous other rob builders in the industry, but when it comes to fly rods specifically there are two that come to mind. Shane of Graywolf Rods and Renato of V-Stick Custom Fly Rods. The unbelievable work that both these guys produce is some of the driving force behind what pushes me to make a better and truly custom build.

The story of the carp build is an easy one! For me, carp were the seemingly impossible species to catch on the fly. Crazy I know, but it took a couple years to finally make everything come together and put one in the net. I think that because it took so much effort, time, patience, failure, perseverance, and finally success that these are one of my favorite fish to target, and I’m sure anyone else that is “carpy” can agree. The concept of the carp theme came together relatively simple, and I knew before it even started the guy whose hands it would end up in. He had no idea about any of it, but I felt it was a good way to say thanks again for helping me bring the first one to the net, and to give back in a way I knew I could to a very deserving dude.

So, knowing this everything came together on a Blue Halo 7 weight blank for the foundation; soft enough to throw carp flies and with enough backbone to fight the big ones. All guides wrapped in shades of gold and tipped in olive, complemented by the box elder burl reel seat. The scale wrap was definitely a labor of love that was cut off several times before I was happy with the final result. The last two things that brought everything together were the “Feeding Common Carp” by Tim Johnson burned into the custom turned cork handle, and the carp flank painted on the rod tube by John Noble. These artists helped bring my vision to life and absolutely deserve their credit!

I’m sure you’ll see many more designs like these in the future coming out of my workshop. I currently have several additional Blue Halo 5wt’s in multiple colors, and a pair of Epic 12wt Boca Grande’s getting similar treatment.” 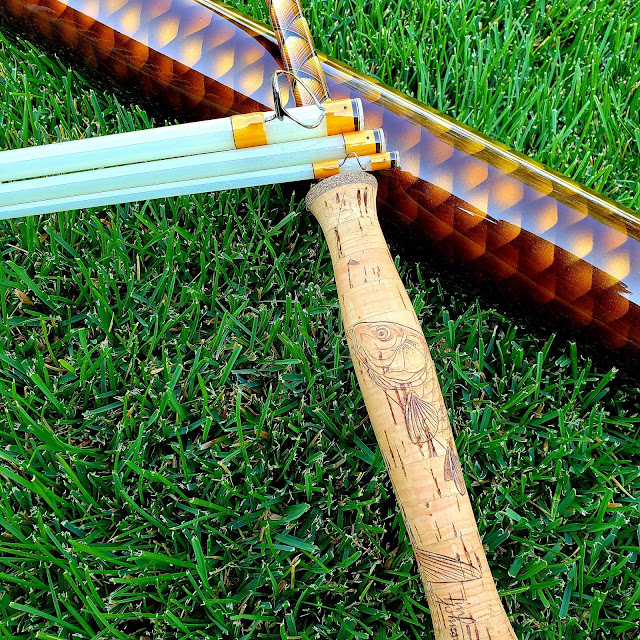 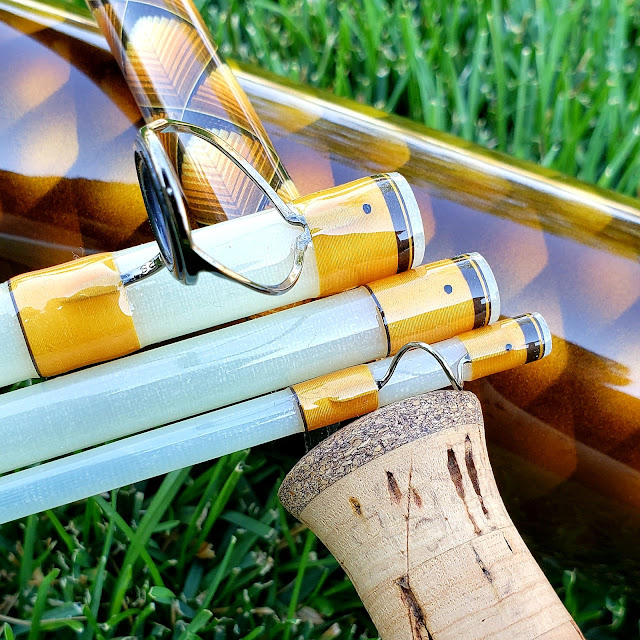 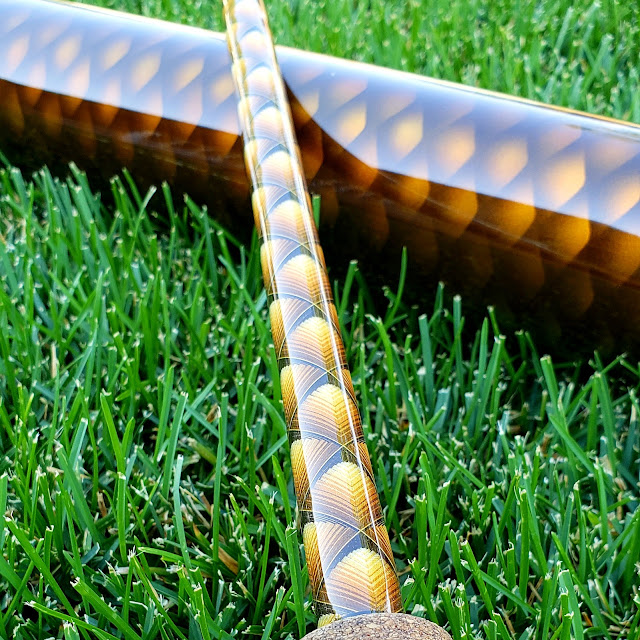 Follow along with more of Nathan’s fly rod building exploits on Instagram.  He’s just getting started on a Swift Fly Fishing Boca Grande twelve-weight build that already looks to be inspired.